I have heard from Starling Lawrence (my valiant editor) several times now; he’s still plowing through the manuscript (up to ancient Greece now) and so far has had only minor queries. He’s not recommending any major cuts (yet), although big discussions about the size of the book are apparently going on up there at Norton. I’m dying for someone to reassure me that the book is OK. Last night I dreamed that I had sent copies of the manuscript to everyone I knew, and that they ALL called me back the next morning to tell me how lousy it was. Including the guy who does my manicures, when I manage to get in and have it done at all. (“Girl, we got to do something about this book.”)

Anyway, the powers-that-be at Norton have decided that the book will go into their next catalog, which is the Fall 2006-Winter 2007 catalog. This covers titles that will come out from September 2006 through March 2007. The deadline for getting copy INTO this catalog is January 18. So even though no one there has read the book all the way through, someone has got to write marvelous copy for it, since the catalog will be the tool the salesmen use to sell Norton’s books all over their territories.

Editors have a great way to get around this–they ask their authors to do a first draft of the catalog copy. I’ve done this for all of my own books, but I HATE it. You’ve got to forget every bit of modest self-effacement you’ve ever learned (and I’m from the south, where we don’t talk about how great we are–or if we do, we pretend we’re talking about something else). Instead you’ve got to make your book sound like the Greatest Thing Since Sliced Bread With Peanut-butter AND Jelly On It.

After much nail-biting and hair-yanking I wrote the following copy, which Star will (in his own words) “thoroughly massage” before it goes into the catalog. When I get the final copy back from Norton, I’ll post it so that you can compare the two versions. Mine Will Be Better. (Wait, time to turn off the Self-Promotional Faculty now.)

The Story of the Ancient World:
From the Earliest Stories to the End of Rome

An engaging and erudite narrative history of the globe

Most of us can remember a smattering of Roman history, a few Egyptian myths, and maybe even a name or two from the ancient kingdoms of China and India. But for decades, historians have focused on individual fragments of the past, making it more and more difficult for us to see any common threads between the cultures that gave birth to our own. The Story of the Ancient World is the first volume in a bold new series that tells the story of all peoples, linking together historical events from Britain to the far coast of China, while still giving due weight to the distinctives of each country.

The Story of the Ancient World provides both sweeping scope and vivid attention to the individual lives that give flesh and spirit to abstract assertions about human history. The reader learns that Sumerian kings battled with each other for supremacy–and that the Sumerian king Urukagina, the Jimmy Carter of the ancient near east, had a passion for social justice that made his city a haven for the poor, but vulnerable to the armies of less scrupulous men. Roman emperors struggled to appoint worthy men as their heirs, in an attempt to combine royal title with the lingering ideals of Romeâ€™s republican days–but Marcus Aurelius, deeply solitary and introspective, found close friendships so exhausting that he finally gave up trying to find a colleague to appoint as his heir and simply chose his son Commodus instead, a private decision that nearly doomed the empire.

Dozens of maps provide a clear picture of the landscape that played host to the great events of ancient history, while timelines give the reader an ongoing sense of the passage of years. The Story of the Ancient World is a return to old-fashioned narrative history combined with the methods of â€œhistory from beneath,â€ using literature, epic traditions, private letters, accounts, and other materials to connect the lives of kings and leaders with the lives of the people they ruled. More than a timeline of events strung together in chapters, The Story of the Ancient World provides an engrossing tale of human behavior, as particular lives and audible voices emerge from the distant past. Nor does it shy away from drawing bold conclusions about the direction of the worldâ€™s events–and the causes behind them.

Susan Wise Bauer has taught at the College of William and Mary in Virginia for ten years. She holds graduate degrees in history, literature, and theology and is the author of The Well-Educated Mind, The Well-Trained Mind (with co-author Jessie Wise) and the best-selling elementary history series Story of the World: History for the Classical Child

…And with that over, here are a couple of random pictures from my research trip to Rome: me in front of the Coliseum, which juts up out of the middle of a city street in Rome with cars whizzing by it: 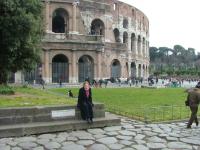 and a Roman road. I’m not sure why I like this picture, but it makes me want to go for a walk. 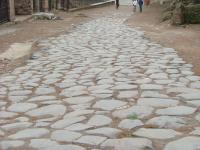