So the book is now officially on the Norton schedule–February 2007. Since it is, as my editor says, “twice the size of an ordinary book” (apparently there won’t be big cuts), he’s hoping to get it back to me in time for me to make corrections and then return the corrected manuscript to the Norton office by February 6. This seems pretty darn tight to me.

While I’m waiting to see the corrections, here’s an excerpt, as requested: Chapter Four, “The Creation of Empire.” (With temporary illustrations–I’m working on locating the best possible photos for the final version.)

Chapter Four
The Creation of Empire

In which the Scorpion King
temporarily unites northern and southern Egypt,
and Narmer of the First Dynasty
makes the union permanent

Time: Around 3200 BC
Place: The Nile river valley

Southwest of Sumer, beneath the coast of the Mediterranean Sea, the first empire-builder stormed through the Nile River valley.

Like the first kings of Sumer, the Scorpion King hovers on the border between history and myth. He appears on no king list; he exists only as a carved image on the head of a ceremonial weapon. But unlike the first kings of Sumer, who occupy the vague distant past, the Scorpion King lives almost within the realm of written history. He made his effort to conquer his world around 3200 BC.

The Scorpion King was the descendant of an African people who had once lived on either side of the Nile valley. Centuries before his birth–in the days when the legendary Alulim ruled over a damper, cooler Sumer–the Nile valley was probably uninhabitable. Every year, when heavy rains poured down on the southern mountains, the gathered waters cascaded down the length of the Nile, northwards to the Mediterranean, and rushed far out over the surrounding land. The flooding was so violent that few groups of hunters and gatherers dared to linger. Instead, they lived in the more hospitable lands to the east and west: settling close to the shores of the Red Sea, and wandering through the Sahara. In those milder, wetter years, the Sahara was grassy and watered. Archaeologists have discovered leaves, trees, and the remains of game animals beneath the sands.

But the hotter, dryer weather patterns that changed the Mesopotamian plain also withered the Sahara. The people of the Sahara journeyed east, towards the well-watered Nile valley. Thanks to the decreasing rains, the Nile flood had become more moderate; the refugees found that they could manage the yearly inundation, digging reservoirs to hold the water at flood-time, and canals to irrigate their fields in the drier months. They built settlements on the banks, planted grain in the dark silt left by the floods, and hunted the wildlife of the marshes: wild cattle, ibex, crocodiles, hippopotami, fish and birds. Other peoples travelled over from the western shores of the Red Sea to join them. They were the first full-time residents of the Nile valley: the first Egyptians.

Unlike Sumer, the Nile valley had game and fish, stone, copper, gold, flax, papyrusâ€”everything but wood. The Egyptians did trade west for ivory, east for shells, and north for semiprecious stones, but to survive they needed only the Nile.

The Nile, the bloodstream of Egypt, ran through a valley five hundred miles long, bordered by cliffs in some places and by flatlands in others. The yearly floodwaters began upstream, in what are now the Ethiopian highlands, ran down past the Second Cataract towards the First Cataract, careened around a bend where kings would one day be buried, and thundered towards a flat plain where the river finally fell away into a dozen streams: the Nile Delta. [Map 4.1: Egypt]

Because the Nile flowed from south to north, it was clear to the Egyptians that every other river ran backwards. Judging from later hieroglyphs, they used one word for north, downstream, and back of the head, and another for upstream, south, and face [4.1]; an Egyptian always oriented himself by turning south, towards the oncoming Nile current. From the days of the earliest settlements, the Egyptians buried their dead at the edge of the desert, with their heads pointed south and their faces turned west towards the Saharan waste. Life came from the south, but the Land of the Dead was westward, towards the desert they had fled as grass and water disappeared.

The Egyptians gave their country two different names. The land where the yearly flood laid down its silt was Kemet, the Black Land; black was the color of life and resurrection. But beyond the Black Land lay Deshret, the deathly Red Land. The line between life and death was so distinct that a man could bend over and place one hand in fertile black earth, the other on red, sunbaked desert.

This doubleness, an existence carried on between two extremes, was echoed in Egypt’s growing civilization. Like the cities of Sumer, the Egyptian cities saw â€œstreaming-inâ€ by 3200 BC. Nubt (also called Nadaqa), on the east-west route that led to gold mines, became the strongest city of the south, with Hierakonpolis, home to at least ten thousand, not far behind. Very early, these southern cities identified themselves not as separate and sovereign, but as part of a kingdom: the White Kingdom (also called â€œUpper Egypt,â€ since it lay upstream from the Mediterranean), ruled by a king who wore the cylindrical White Crown. In the north of Egypt (â€œLower Egyptâ€), cities banded together in an alliance called the Red Kingdom; the cities of Heliopolis and Buto grew to prominence. The king of Lower Egypt wore the Red Crown, with a cobra shape curling from its front (the earliest portrayal of the crown dates to around 4000 BC) [4.2], and was protected by a cobra-goddess who spat venom at the king’s enemies. [4.3] The two kingdoms, White and Red, like the Red and Black Lands, mirrored that basic Egyptian reality: the world is made up of balanced and opposing forces.

Unlike the Sumerian king list, which apparently intends to chronicle the beginning of time, the oldest Egyptian king lists do not go all the way back to the White and Red Kingdoms, so the names of their kings are lost. But for the existence of the Scorpion King, we have a different kind of testimony: a macehead, unearthed at the temple at Hierakonpolis. On it, a White King, wearing the distinctive White Crown, celebrates his victory over defeated soldiers of the Red Kingdom (and holds an irrigation tool, showing his power to sustain his people). To his right, a hieroglyph records his name: Scorpion. 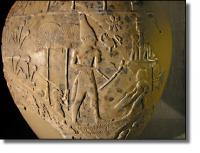 The Scorpion King himself may well have been a native of Hierakonpolis, which was itself a double-city. Hierakonpolis was originally two cities divided by the Nile: Nehken, on the west bank, was dedicated to the falcon god, and Nekheb on the east was guarded by the vulture goddess. Over time, the two separate cities grew into one, watched over by the vulture. Perhaps the Scorpion King, seeing the two halves united, first conceived his plan of drawing White and Red Kingdoms together under one king.

His victory, which probably took place around 3200 BC, was temporary. Another carving records the reunion of the two kingdoms under another White King, perhaps a hundred years later. Like the Scorpion King macehead, the carving was found at the temple of Hierakonpolis. Done on a palette (a flat piece of stone that served as a ‘canvas’), the carving shows a king who wears the Red Crown on the front of the palette, and the White Crown on the back. A hieroglyph names the king: Narmer.

The name â€œNarmerâ€ means â€œRaging Catfish,â€ or, more poetically, â€œBaleful Catfish.â€ It is a compliment, as the catfish was the bravest and most aggressive of all fish. On the back of the Narmer Palette, Narmer, in his role as White King, holds a warrior of the Red Kingdom by the hair. On the front, Narmerâ€”having doffed the White Crown and put on the Red Crown instead–parades in victory past the bodies of decapitated warriors. He has drawn the Red Kingdom under White Kingdom rule at last.

It seems likely that Narmer is another name for Menes, who appears in the Egyptian king lists as the first human king of Egypt. Of him, the Egyptian priest Manetho writes:

After the [gods] and the demigods,
the First Dynasty comes, with eight kings.
Menes was the first.
He led the army across the frontier and won great glory. [4.4]

The breach of the frontierâ€”the border between the kingdomsâ€”created the first empire, and one of the world’s longest lived: great glory indeed.

Manetho’s account comes long after the fact. Manetho served in the temple of the sun-god Ra at Heliopolis twenty-seven centuries later; around 300 BC, he took it upon himself to reconcile different versions of the Egyptian king lists into one document, using (among other records) a papyrus called the Turin Canon, which also identifies Menes (â€œMenâ€) as the first king of Egypt.4 When he compiled his list, Manetho organized the scores of Egyptian rulers since 3100 into groups, beginning a new group each time a new family rose to power, or the kingship changed locations. He called these groups dynasteia, a Greek term for â€œpower of rule.â€ Manetho’s â€œdynastiesâ€ are not always accurate, but they have become traditional markers in Egyptian history.

The First Dynasty begins, for Manetho, when the two parts of Egypt were united under the first king of all Egypt. According to the Greek historian Herodotus, Menes/Narmer celebrated his victory by building a brand new capital at Memphis, the central point of his brand new kingdom. Memphis means â€œWhite Wallsâ€; the walls were plastered so that they shone in the sun. From the white city, the ruler of united Egypt could control both the southern valley and the northern delta. Memphis was the fulcrum point on which the two kingdoms balanced. [Map 4.2: United Egypt]

Another scene, carved on a macehead, shows Narmer/Menes wearing the Red Crown and taking part in some ceremony that looks much like a wedding; possibly the victorious founder of the First Dynasty married the princess of the Red Kingdom in order to unite both kingdoms in the bodies of the Double Crown’s heirs.

For the rest of Egypt’s history, the doubleness of its origin was enshrined in its king. He was called the Lord of Two Lands, and his Double Crown was made up of the Lower Red Crown placed overtop the Upper White Crown. The southern vulture and the northern cobra, one crawling on the earth and the other inhabiting the sky, guarded the united kingdom. Two contrary powers had been brought together into a mighty and balanced whole.

Narmer himself reigned for sixty-four years and then went out on a hippo hunt, a quest traditionally undertaken by the king as a display of his power over civilization-threatening enemies. According to Manetho, he was cornered by the hippopotamus, and killed on the spot.