Confession time: I am totally addicted to Gordon Ramsay’s Hell’s Kitchen. And Kitchen Nightmares. And his autobiography is darned fascinating too. Got my husband hooked as well, so now when we retreat to our room for a quiet evening we’re as likely to turn on a Ramsay show as to watch Castle (Pete’s current favorite) or figure skating (not Pete’s current favorite).

Before anyone points this out: Yes, OK, listening to Ramsay talk to ANYONE on American TV requires immense patience for bleeping, and he throws plates, kicks trash cans, and admits to having four children and never changing a diaper. 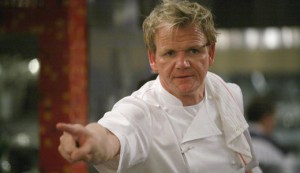 Whatever. He’s made his choices; they’re not the same as mine. (Anyway it’s a tiny bit difficult to compare a woman’s life with a man, as “not changing a diaper” isn’t exactly a choice for most mothers. Topic for a future post, I think.)

The truth is that I find chef memoirs (whether in book or screen form) compelling. I like to eat. I LOVE to cook (in fact, when I have a bad day, I yank out my recipe books and get to work). But there’s another aspect of food that engages me–how a chef runs a restaurant kitchen, since that involve 1) creating something, 2) figuring out how to do it over and over and over again, each time maintaining the quality, and 3) learning how to direct other talented people as they help out, since it’s impossible to work alone.

1) feels painful, when you’re in the middle of it, but it’s nothing compared to the challenges of 2) and 3). I think that most creative people, by definition, are lousy at doing what we do again and again and again at the same high level, since repetition and creativity originate in different parts of the brain. And creativity mostly happens when you’re entirely alone. In fact, creativity is fertilized and nurtured by aloneness, which makes directing others an enormous challenge for creative people.

Yet if you’re any good at what you do, you end up with 2) and 3) eventually. You either figure out how to cope, or you crash. I follow Ramsay’s doings and tribulations because they’re an enormously magnified version of the challenges I face. (ENORMOUSLY magnified. But still.)

These past weeks, we’ve been watching the later seasons of Hell’s Kitchen, and this has thrown me into contemplative mood. I’m watching as Ramsay (who’s spent years in kitchens, turning out plate after plate of identical risotto and sea bass and creme brulee) motivates his twenty and thirty-something competitors by giving them highlights of the life-that-will-be if they become top chefs: limousines and expensive meals, beauty treatments and red carpets, photographers and champagne. Inevitably, the recipients of these favors gush all over the cameras: “This is what it will be like to be a top chef! Now I REALLY want the prize!”

Much as I enjoy the shows, this has started to rub me the wrong way.

Cooking, I think, must be like writing. You do the same thing day, after day, after day, after day. You’d better enjoy it for itself, not for the rewards. There are certainly high points, and of course we all look forward to them. I eat at better restaurants than I used to, and I’m not dying to go back to Denny’s (not that there’s anything wrong with that…OK, I’m not sure I can make a case for that, actually). Occasionally I get to go to book parties, or swan around New York in a really nice dress, and you’d better believe I enjoy it. But there’s no way that those very occasional rewards make the day-to-day slog worthwhile.

If you’re a writer, or a cook, you’d better find some satisfaction in the slog itself.

Or else you’re in big, big trouble.