Time for my periodic review of what I’ve been read over the last few weeks. As with my last (somewhat long ago) book review roundup, this one is weighted towards fiction; I’ve read fifteen or so tomes dealing with social media in the last month, but I don’t feel like reviewing them here. If you’d like to know my reactions to their arguments (or lack thereof), you can alway download the audio of my Regent lectures in Vancouver.

So here are some short takes on my recent for-fun reading.

True, spare stories of regular people’s lives, linked together by crises large and small. The aging of the title character is particularly vivid: visiting her grown son, Olive returns home and turns on her bedroom light to see that “in the mirror…across her blue cotton blouse was a long and prominent strip of sticky dark butterscotch sauce. A small feeling of distress took hold. They had seen this and not told her. She had become the old lady her Aunt Ora had been.” I haven’t read Strout’s other books but intend to look them up.

I collect books about professional cooking; I’m not sure why I find them so diverting, but maybe because (as I’ve written before) the restaurant business shares a few interesting parallels with the publishing world, while being very safely something I don’t aspire to do. Bourdain’s almost always entertaining (except when he goes off on one of his jags about how fascinating organized crime is; that I don’t find diverting at all), and I got a few good bedtime sessions out of this book. Mostly, though, it’s a collection of previously published essays, some of which are obviously dated. It left me feeling mildly amused, and also wondering how much I could wring out of some of my previously published writings, were I too busy (or lazy) to write a brand new book.

Not as evocative and true as Olive Kittridge, but I admire a male author who can write about a woman’s life with semi-accuracy. (No, Thomas Wolfe and Philip Roth, you don’t qualify. Even a little bit. Sorry.)

This is a dark and despairing book, and the characters are less than likeable, but a very thin gleam of grace glimmers at the end.

Also fulfilled its purpose, which was an evening’s entertainment, but I’m really not believing the cover copy which tells me that Snobs is “an insider’s look at a contemporary England where class still matters.” Well, yes, of course class still matters, but Fellowes seems to be channeling Jane Austen by way of Hello! magazine while considering how the dialogue will sound in the eventual movie adaptation.

His characters can’t possibly exist in the real world. (And even if they do, he hasn’t convinced me of it, so the book’s still a failure.)

G. K. Chesterton, The Man Who Was Thursday

This was a return visit to an old favorite, one I haven’t read since college. I love it when a book holds up. I’m not sure why I latched onto this book in college, but Chesterton still knows something about the impulse to destroy, which is why I enjoyed it this time through.

That, and passages of description that still blot out the real world with their vividness.

I’m a big fan of Renault’s historical novels, but somehow I’d missed this one until recently. Not nearly as successful as the brilliant (and definitely NOT G-rated) The Persian Boy, Funeral Games still provides a wonderful imaginative door into the ancient world.

When I write history I try to open one door to the past; I envy writers who have the key to the other passageway in. 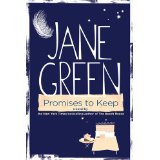 Sometimes I like Green’s chick-lit-grows-up novels, but this one proves a truism: a novel written out of deep personal conviction that the readers need to UNDERSTAND something is often a clunker. Green’s tale of a mother with terminal cancer (that’s not really a spoiler–you can figure it out by about the second chapter) was apparently written to honor a friend who died from the disease; this is, of course, admirable, but her main character is saintly, and doomed, and as unreal as any Victorian heroine.

Another disappointment. Over the last decade, George’s prose style has been afflicted by middle-aged spread. What with listing every single fleeting thought that goes through every minor character’s mind, describing in laborious detail every single physical motion each character takes, and indulging in arcane vocabulary, the book loses even the tiniest bit of forward momentum by Chapter 3. By mid-book, I didn’t really care who’d done the murder–in fact, I couldn’t clearly remember who’d been murdered–I just want her to GET ON WITH IT.