Time for another pair of quick book reports…

Last week I picked up a disaster book that was on the New Books shelf of the Williamsburg library: A Wall of White: The True Story of Heroism and Survival in the Face of a Deadly Avalanche, by Jennifer Woodlief. 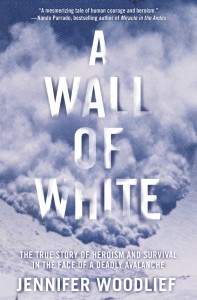 (If you have to have a subtitle THAT long, maybe you ought to have a longer title instead? Although I should talk, since the subtitle of my upcoming book is “From the Conversion of Constantine to the First Crusade” and the subtitle of the corresponding kid’s history book is “History for the Classical Child, Volume 2, The Middle Ages, From the Fall of Rome to the Rise of the Renaissance, Revised Edition.”)

A Wall of White was OK, but not gripping; I skimmed through a bunch of pages to get to the end. Grade: C+

So this week I balanced it out with a disaster classic that I haven’t read for a while: Jon Krakauer’s Into Thin Air. 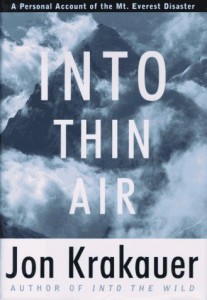 I’m in awe of Krakauer’s narrative. I find that disaster books encapsulate the challenge I have (in a much more sprawling way) in writing narrative history: how do you keep the pages turning when the end of the story is already ? Barbara Tuchman, a writer I much admire, says in Practicing History that she does her best work when she writes as if she didn’t know what was going to happen: Henry VIII won’t grow unhappy with this wife, the English will drive off those Norman invaders, the plague won’t spread across the known world. That’s a mental trick that doesn’t work at all for me. What’s astounding about Krakauer’s work is that he tells you right at the beginning of the book exactly what happens, who’s going to die, and how, and yet the narrative still holds you all the way through. Woodlief tries to create suspense by not revealing the end of the story…and it doesn’t work. I was bored.

There were a couple things I could point to: ill-timed digressions (Krakauer has plenty of digressions, but once events really start to accelerate he stays on task; Woodlief takes off three pages while a rescue dog is digging for a dying avalanche victim to tell us about the dog’s babyhood and training), clunky prose (“The final tumbler in the lock of their fate clicked smoothly into place.” You can use a metaphor if you only have to touch on it twice, but three times is flogging it), cliched language (“Jake was moved by the experience”). But I’m not sure that analyzing technique explains why Woodlief’s book flags while Krakauer’s drives relentlessly ahead. Into Thin Air comes out of some deep well that’s accessed by novelists more often than by writers of nonfiction.