This week, two articles about education caught my eye.

The first came from the New York Times. “Bracing for $40,000 at New York City Private Schools,” the headline read. And we’re not just talking about high school either.

Avenues, the for-profit start-up school set to open in Chelsea in September, will charge $39,750 starting in nursery school, which might make it the most expensive preschool in the city. (The school will offer bilingual classes and a longer school day than most early-childhood programs.)…At Horace Mann, where the parents of kindergartners are paying $37,695 with additional fees, the children attended 155 days last year. For those doing the math, thatâ€™s $243 a day.

Although home educators, granted, can’t offer the same benefits as these $40K academies…

At Poly Prep, with 983 students on two campuses in Brooklyn, there are five sections of Level I Mandarin. Dalton offers Zen Dance; Saint Annâ€™s has Roman Travel Writing; and at Columbia Grammar, there is a theater class on â€œThe Nature of Revenge.â€

At the moment, my ninth-grader is wallowing on the floor with the dog and my fifth-grader is writing a novel on her brother’s ancient Mac hand-me-down. We’ve never done Zen dance, and my instruction on the Nature of Revenge has mostly consisted of yelling, “JUST BECAUSE YOUR BROTHER POKED YOU DOESN’T MEAN YOU HAVE TO POKE HIM BACK.”

I mean, we have done a few out-of-the-box educational things. We take field trips to admire great artwork. 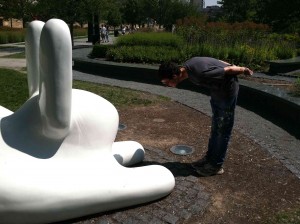 We provide opportunities for active and creative play. 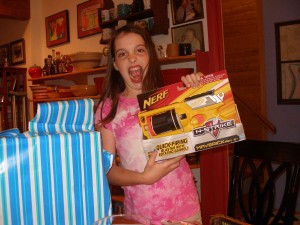 We experiment with the culinary arts. 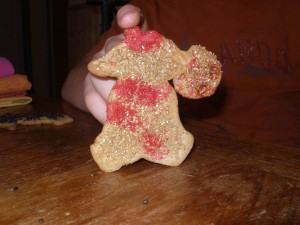 (That’s a zombie cookie, a.k.a. What Happens When Teenaged Boys Cook.)

But somehow I feel that we’re not keeping up, here.

Fortunately, we’re not alone. Newsweek has finally twigged to the fact that not every parent aspires to PTA meetings at Horace Mann.

We think of homeschoolers as evangelicals or off-the-gridders who spend a lot of time at kitchen tables in the countryside. And itâ€™s true that most homeschooling parents do so for moral or religious reasons. But education observers believe that is changing. You only have to go to a downtown Starbucks or art museum in the middle of a weekday to see that a once-unconventional choice â€œhas become newly fashionable,â€ says Mitchell Stevens, a Stanford professor who wrote Kingdom of Children, a history of homeschooling. There are an estimated 300,000 homeschooled children in Americaâ€™s cities, many of them children of secular, highly educated professionals who always figured theyâ€™d send their kids to schoolâ€”until they came to think, Hey, maybe we could do better….

Many of these parents feel that city schoolsâ€”or any schoolsâ€”donâ€™t provide the kind of education they want for their kids. Just as much, though, their choice to homeschool is a more extreme example of a larger modern parenting ethos: that children are individuals, each deserving a uniquely curated upbringing. That peer influence can be noxious. (Bullying is no longer seen as a harmless rite of passage.) That DIYâ€”be it gardening, knitting, or raising chickensâ€”is something educated urbanites should embrace.

As a highly educated parent who happens to spend a lot of time at my kitchen table in the middle of the countryside, I’m not sure I appreciate the wide-eyed wonder in this piece. But the article is worth a read anyway, if only to reassure yourself that your kid does not need classes in Roman Travel Writing to be a fully functioning human being.