It’s been nearly a week since my last post, which is a reflection not necessarily of how hard I’m working, but how many different KINDS of things I’ve had to do.

I’m drawing close to final-draft time on the History of the Medieval World.

I’m doing a number of different editorial tasks for Peace Hill Press: working on the final draft of Writing Workbook II, finishing the last edit of First Language Lessons, Level Four, and helping the PHP West team to get new message boards up (in this case, helping means “watching while you do all the tricky technical stuff and posting comments once you’re done”).

I spent some time corresponding with a friend in crisis.

I put together the worship service for church.

I finished that dratted author questionnaire. 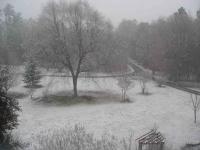 so I had to dig out boots and mittens and coats and make hot chocolate.

And everybody except for Christopher and me got sick, so I spent four days out of the week carrying trays into bedrooms and wiping noses. (Not my husband’s; he can wipe his own nose, thank goodness. But if Emily had wiped her nose into her hair one more time…well, it’s worse than GUM once it dries. No kidding.)

And today I’m feeling fractured and scattered in my mind.

All this stuff needed to be done. None of it could be postponed. I’m already committed to the pub schedules on the writing projects. It only snows here about once every two years, so what was I going to say to the kids: Forget it, I’ve got to go write? (Don’t think so.) And it’s January. People get the flu.

Except for the sickness and the snow, none of this stuff was really out of the ordinary; and, individually, each task was entirely manageable. But I’m finding that my ability to switch fluently from task to task is NOT what it once was. I find that I have an incredible NEED to finish ONE TASK AT A TIME.

Yet, practically speaking, this is impossible. I have to turn from task to task, job to job. And every time I switch duties, it takes me exponentially longer to remember where I was and what I was doing.

Is this because I’m getting older? Is it because the projects I’m working on are more complex than they once were? I’m not sure.

And as for the sickness and the snow: it’s tempting to say to myself, “Well, this week was unusual. Next week it will be easier to find an uninterrupted stretch of time in which to shape the story of the medieval world.”

But I don’t think that’s true. Uninterrupted, peaceful weeks are the exception, not the rule. It’s so easy to think of crisis-free weeks as the standard of normality, and then to treat the weeks which are punctuated with sickness and urgent family demands and bad weather and crashing computers as abnormal, unusual, something to be waited out until real life resumes.

So how do I do this? How do I acknowledge that life is a series of crises, that tasks do not divide neatly into uninterrupted chunks of time, and yet also finish projects which require continuity of thought and practice? And why do I feel this increasing need for continuity of thought, when I used to find it simple to rotate from project to project, subject to subject, class to class, crisis to crisis?

No answers today; just questions, and an enormous pile of medieval-history manuscript in which I have not yet found the story.

And the manuscript goes off!Production
Loud noises from downstairs…Coping with the farm