So far, we’ve spent three days exploring the streets of Seoul, snapping photos of medieval sites and appreciating this new culture. At this point, I could put up my pictures of historic and cultural sights, or I could post my photos of all the interesting food we’ve eaten and seen.

Since I’m travelling with the boys, I’m going for the food first. History coming soon. (Although food is important. I’ve been reading Asian history for years now, but until you breathe the air of a place, it’s hard to write about it well…and certainly food is central to a city’s identity.)

Yesterday we visited the Nam Dae Mun Market (here are the boys with two of our wonderful hosts, who took the whole afternoon to show us around). 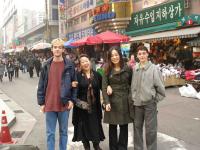 I’ve never seen anything like this market, which sprawls across blocks and blocks and blocks of downtown Seoul, and which is packed with every imaginable kind of goods for sale and more people than I’ve ever seen crammed together in narrow streets. 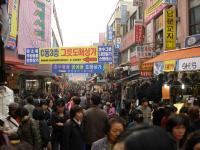 Among the things we don’t see at home: jars of ginseng, 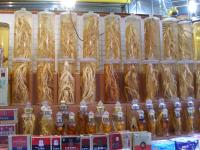 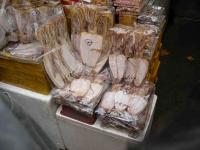 We ate a late lunch of barbecued pork at a tiny restaurant tucked back off one of the market streets, 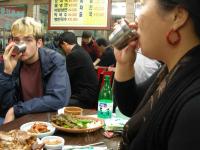 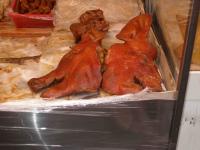 (these would be the barbecued pig’s heads),

and Christopher tried out the accompanying hot peppers. 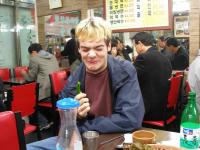 His greatest adventure, though: both he and I sampled the fried butterfly larvae. You stick a toothpick into them and pop them in your mouth. When you bite down, they POP. 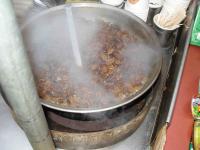 After the market, we accompanied our hosts to the nearby supermarket, which had the most amazing variety of fresh seafood I’ve ever seen. If I lived near a market like this, I’d cook in a completely different way. 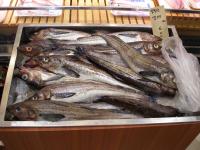 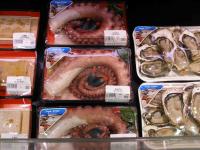 This is the one thing I haven’t yet tried, 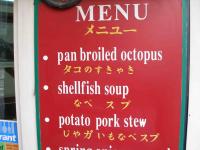 although, judging from the tanks outside the restaurants, it’s about as fresh as you can get. 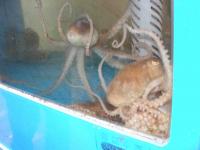 In the evening, my publisher hosted a dinner for me which included the amazingly talented editors, designers, and marketing folks at Theory & Praxis, along with my Korean translator. I spent too much time eating to take pictures (and thought it might rude to keep snapping shots of people while they were chewing), but towards the end of the meal it did occur to me that I’ve never before been treated to a meal so luxurious that it had FOUR different kinds of wine accompanying it. 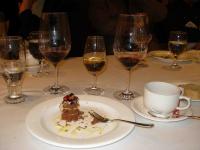 Today I’m doing the last of four interviews (two of them have already appeared in the papers), while the boys are off to Lotte World. Stay tuned for further updates…