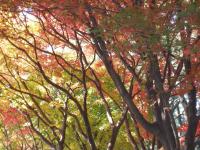 Day before yesterday, we set off south for Gyeongju, the ancient capital of the old Korean kingdom Silla, where I wanted to see the royal tombs: huge mounds of stone with clay and grass covering them, built over wooden coffins where the kings were laid to rest. 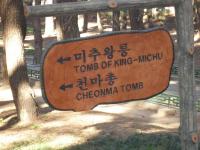 Only a few of the tombs have been excavated; many of them still lie across the landscape in perfect harmony with the curves of the mountains behind them. 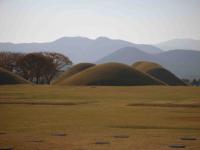 This is one of the artifacts which has been uncovered, and now is one of the greatest Korean national treasures–the golden crown of the king of Silla. 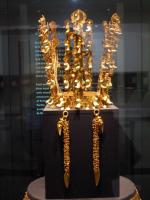 The next morning, we drove into the mountains to Haeinsa Temple (in the photo below, you can see the main temple building and, in front of it, worshippers going through the ritual of walking the path while they pray). 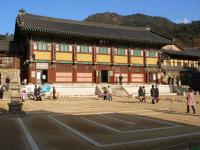 Behind the temple lies a square of ancient buildings which contain the most amazing sight Iâ€™ve seen in Korea: the Koreana Tripitaka, over eighty thousand carved wooden blocks for printing pages of Buddhist scripture. The blocks have been in these same buildings since the early Middle Ages, preserved by a brilliant building design which naturally keeps the humidity and airflow constant in both wet and dry seasons. You canâ€™t get into the buildings, but I was able to photograph one of the rows of blocks through the wooden grates. 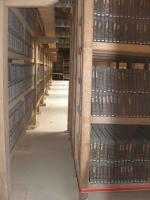 In this photo you can see the characters carved into the faces of two of the plates. 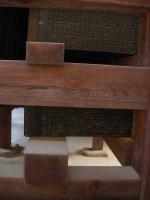 As a gift, our guide–an old friend of my publisherâ€™s, who had helped to arrange the whole outing–gave me a sheet of parchment with an actual page from one of the blocks printed on it. They are still sharp and clear.

By this time, the sun was beginning to set, 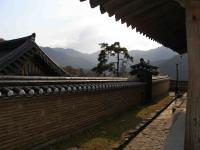 so we got back into the car and drove deeper and deeper into the mountains, up a teeth-clenchingly steep road to a tiny temple perched on the side of the mountain. 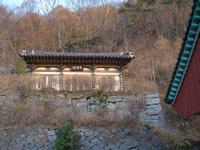 There, we had dinner with the monk in the monastery kitchen (only vegetables, of course). 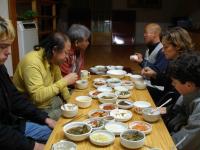 and after dinner we climbed a steep path up to the guesthouse, which sat at the top of the mountain right at the edge of the dropoff into the valley. 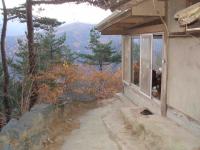 There, the monk served us tea, in an elaborate and lovely ritual of hospitality. 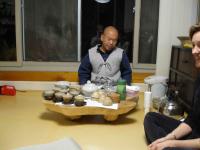 After which my publisher and and his friend produced the hospitality gifts they had brought (wine), and the rest of us dug out out all the snack food weâ€™d been eating in the car, and the evening turned into a corn-chip-and-Whoopie-Pie-feast. High on the mountain, in the middle of the night, with a Buddhist monk. 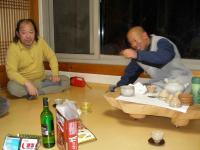 Once the party wound down, we all slept on the floor, which was more comfortable than it sounds because the floor was heated from beneath. The biggest challenge, once we were all wrapped up in our blankets and snoring (in the case of three of us, anyway), was the plumbing (so to speak). The guesthouse had no water; to take care of middle-of-the-night issues, you had to go out into the dark night, put on your shoes, pick your way down a woods path with a steep drop to the right, 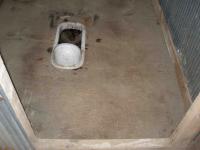 But the inconveniences were minor, considering the view: in the morning, the sun rose up over the mountains

and the valley lay all spread out below. 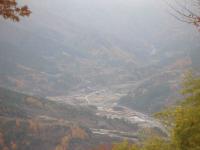 Iâ€™ve gotten to do and see things on this trip which no tourist would ever be privileged to experience. I canâ€™t speak high enough praise for my publisher and his wife, who spent the entire week with us, and for all the wonderful folks associated with Theory & Praxis who have made it possible.

Getting ready to head home now; as soon as I put my laundry in the washer, kiss my husband, hug the little ones, and get some sleep, Iâ€™ll post a few final pictures.