So the big excitement at BookExpo for Peace Hill Press is that Christopher got Garrison Keillor’s autograph, 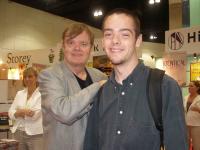 which was even more exciting than Alec Baldwin waving at Dot (as I walked by his signing table with her on my hip–I didn’t know he was there) and saying, “Baby! Hi, baby! Look at the baby!” 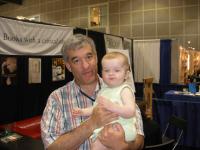 There are always celebrities at BookExpo, signing their latest book, but there’s a particularly high celebrity-factor here this weekend, probably because it’s in L.A. Bob ran into Doctor Ruth, William Shatner and Leonard Nimoy have both been doing signings, Jamie Lee Curtis and Cheech (of Cheech and Chong) are around somewhere–oh, and there have been some actual WRITERS doing signings too. (Ray Bradbury and Neal Stephenson, for you SF fans–although I didn’t make it over to either booth. Drat.)

We’ve talked to a lot of booksellers who weren’t familiar with our books, and to a number of foreign publishers investigating translation rights. I’m hoping that the press from India follows through, and also that one of the two contacts we made with Spanish-language publishers will pan out. I’d love to see the books in Spanish.

I’ve been to a few seminars–one on multimedia supplements to children’s books (The Story of the World Role Playing Game? ), one on changes in book distribution (incredibly unhelpful, as the presenters stood up and said, “There are big changes coming in book distribution!”), and one last night where Ron Sider, Randall Balmer, Marcia Ford, and David Gushee talked about evangelicals and their involvement in politics. That was the best, and the most sparsely attended, of any of the sessions.

Wandered over to say hello to the folks at Princeton who’ll be selling The Art of the Public Grovel, 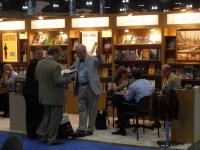 tried out the Kindle (keep an eye out for Peace Hill Press books in the Kindle format–we’re working on it), 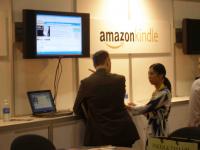 investigated a number of of the parties that seem to break out around 4 PM at the bigger publisher booths. They bring in caterers and a portable bar, and everybody storms the aisle. 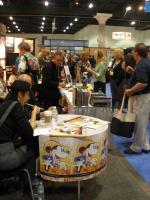 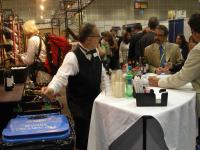 I’ve been going back to the hotel and collapsing afterwards, but apparently there’s been quite a bit of wild partying going on. The guy across the aisle was on his way to the “Ted Turner party at Larry King’s house,” and Prince hosted a house-party (so I hear) that went on until 5 AM.

Weirdly enough, I didn’t get any of those invitations. Hmm…

At 4 PM today, we’ll break down the booth and send the essentials (the PTSB and a few other things) back to the Norton warehouse. We’re trying to take back as little as possible, since it costs an arm and a leg and another leg to ship it all back to the east coast, so we’ll probably donate most of our display books to First Book, a great charity which will box them up and distribute them to kids who need them.