When I came back from L.A., the first pass proofs of the Art of the Public Grovel were waiting for me. (Those of who’ve been reading this blog for a while may remember the arrival of the first pass galleys for the History of the Ancient World.) So I’ve spent this week reading carefully through the typeset pages and comparing them with the copyedited manuscript pages, trying to catch typos and errors. 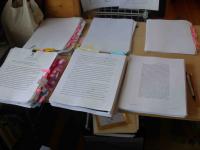 The first pass galleys are the pages that will eventually be bound into the book; the typesetters create them from the electronic file of the manuscript that I sent, and they’re supposed to incorporate into the galleys all of the copyeditor changes made in pencil on the hard copy of the manuscript pages. This creates plenty of opportunity for new errors to creep in. Like this one (you’ll need to click on the picture and look at the large version to get the full effect): 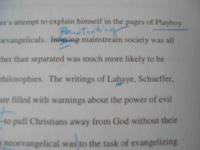 (What do you think the copyeditor’s blue insertion says? Now, have a look at what the typesetter THOUGHT it said…) 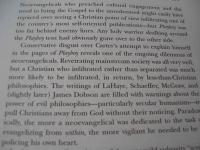 Yes, that’s right. The copyeditor wrote “penetrating.” The typesetter–trying, I guess, to read the handwritten letters–typed “revetrating.” Which is not, so far as I know, a word.

Due to the struggle I had with the copyedited pages and the tight production schedule that the book is on, I didn’t get to approve all the copyedits before they went to the typesetter, and this is one of the changes I hadn’t seen before. So I changed it back to the original wording anyway. I had written “infiltrating,” which is different from “penetrating,” and I guess I’ve taught too many freshmen classes to ever pick that particular word (they all giggle when you use anything that might possibly be interpreted as a double entendre).

The typesetter on this particular job seems to have been very literal-minded: he (or she) incorporated changes into the text whether or not they made sense. Here, for example, is a copyedit I accepted: 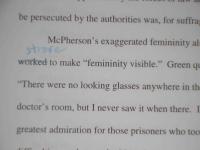 (The copyeditor changed “work” to “strove”…) 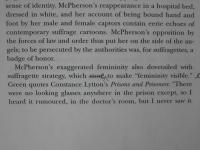 (…and the typesetter saw “store,” which turns the sentence into gibberish.) 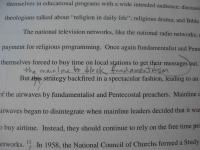 and that the typesetter reproduced faithfully. 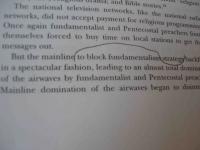 And here’s a copyeditor notation that I don’t quite understand. 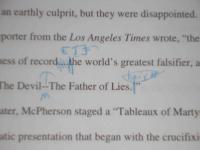 Neither did the typesetter. 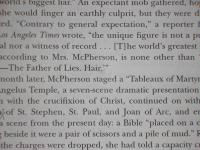 These are the kinds of mistakes that make me scared to open the book, once it comes out. If I miss something like this, I will sound like an IDIOT.

And then there are lots of smaller changes, like this one: the copyeditor deleted the first comma but forgot to take out the second, which makes the sentence incorrect… 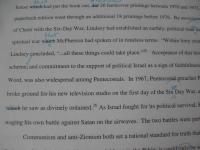 and there are changes that I can live with, but wouldn’t be my choice, like this one… 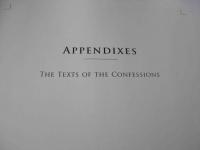 Webster says that “appendix” can be made plural as either “appendices” or “appendixes.” The copyeditor chose the second. My five years of Latin are shouting NO, NO, NO! but I’m not listening.

Princeton has graciously agreed to let me have a look at the second pass galleys to check on whether corrections have been made, so I’ll be waiting for those to arrive.

In the meantime, I’m getting ready to head to Seattle at the end of the week for the WHO conference. I’m taking Dan and Emily with me so that they can meet their baby cousin for the first time. Will report on that shortly (if I survive the coast-to-coast flight…)