We arrived in Athens Monday afternoon, on the almost-final leg of our trip (we’re stopping overnight in Paris on the way back, mostly to break up the flight). I’ve never been to Greece before. First impression wasn’t all that favorable, mostly because our luggage got shuffled off onto the wrong belt and we spent an hour hunting around the Athens airport for it (although technically we should blame that on Alitalia). But also because Athens is a big city, and dusty, and dry, and filled with graffiti. Everywhere. On buildings and overpasses and historical monuments. 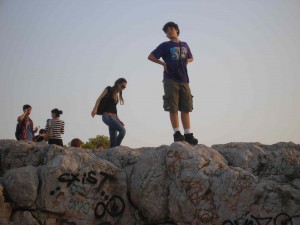 (That’s one of the lower tiers of the Areopagus, by the way–Mars Hill).

I said, “Is it illegal?” “Oh, sure,” our taxi driver said, “but it is kids, you know, thirteen, fourteen–they spray it on PSSSTTTT and then they’re gone. No one can catch them.”

Our apartment was one street over from the pedestrian pathway around the Areopagus and the Acropolis, and as soon as we arrived we went over to climb up the Areopagus and look up at the Parthenon; it was too late to go in, but the view was stupendous. 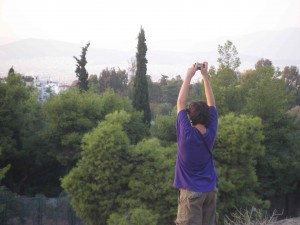 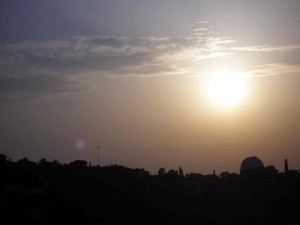 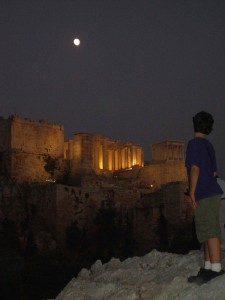 The next day, we had an adventure: we took the metro to the port of Piraeus and then got tickets on a ferry to the nearest Greek island with a beach, Aegina. 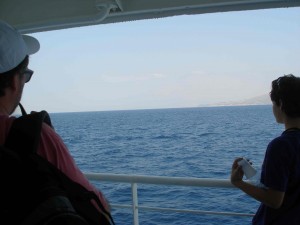 That was an adventure for three reasons. 1) It was a Greek island. 2) I don’t speak Greek. None at all. In France and Italy I can muddle through; my only Greek is koine (New Testament) and that doesn’t get you far in Athens. 3) There was a METRO. Yeah, I know it’s lame, but I grew up in the country and the one thing I’m incapable of in cities is figuring out train systems. I have ended up on the wrong end of New York, in the wrong suburb of London, and in some place in Paris I could never find again. Now I just take taxis.

So actually GETTING to the port of Piraeus, and back again, was a victory. (Go, us.)

Dan’s one request for Greece was that we swim in the Aegina, so after lunch (THAT also was an adventure–note the octopus and prawn entrees) 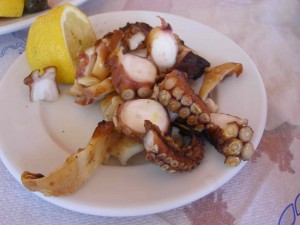 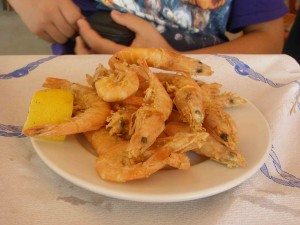 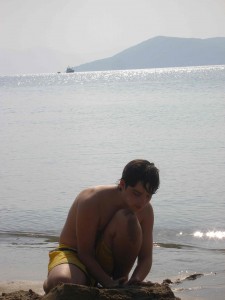 We had a glorious day, but by the time we got back–late–Dan was developing a horrible cold. And Dan with a cold is…damp. And miserable.

So we spent this morning–our last one in Athens–eating cookies. And playing games. Our fallback strategy.

Finally, late afternoon, Dan felt well enough to haul himself up to the Acropolis. The marble is so slick from centuries of feet that you can barely stand on it; the wind is torrential; and you can squint and imagine that the city below is mist. Pictures, without commentary, because I’m still looking for the right ones. 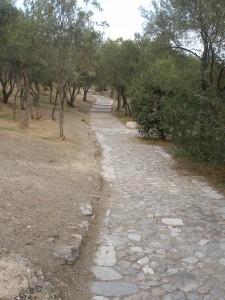 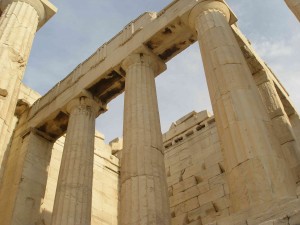 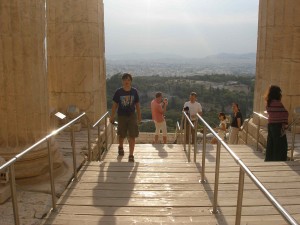