I’m back from Philadelphia, where I guest-lectured at Westminster Theological Seminary, sat on a panel about education, and made plans for BookExpoAmerica. And I forgot my camera. So a few details of all the above, entirely illustrated by stock photos…

I earned a Master of Divinity at Westminster in 1991 and I have very fond memories of my three years there (for one thing, I met my husband at Westminster; for another, I really LOVED Advanced Hebrew). 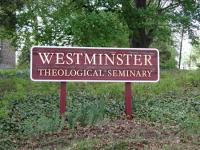 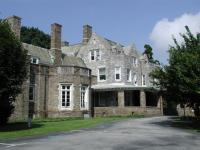 I have a great affection for Westminster and a great respect for its (mostly male) faculty. I find it discouraging, though, that Westminster is still going in circles over the same issues that were troubling the (overwhelmingly male) faculty when I was there fifteen years ago. To wit, What Should Women Be Doing in the Church? (For those of you who are thinking, “Huh?”, an orthodox view of the New Testament has to take seriously certain passages in which Paul seems to be restricting some church jobs to men only.) My guest lecture was in an ecclesiology class, in which I tried to get the students to consider the ways in which their Americanized evangelical indoctrination in what it means to be “masculine” or “feminine” affects their understanding of the New Testament. Evangelicals generally are very resistant to the idea that their ideas about masculinity and feminity are in any way shaped by their culture; a certain division of gender roles has become, for many American evangelicals, the center of their orthodoxy. (Not the Apostles’ Creed, say, or the Nicene Creed, but, “Do we ordain women?”) Far too many evangelical groups identify themselves, not by their understanding of the resurrection, but by the restrictions they place on women.

There are tremendous fears that lie behind this attitude, which I have written and lectured on before and won’t take the time to lay out here. Sometimes discussions about “women in the church” are actually discussions about the reliability of the Bible, and sometimes discussions about the reliability of the Bible are actually discussions about men’s fears of women, and it’s exceedingly difficult to figure out WHICH conversation you’re having at any given time. However, I highly recommend a new and brilliant book by John Stackhouse (which I’m supposed to be reviewing for Books & Culture) in which he explains how to distinguish between New Testament principles which are intended to apply only in limited circumstances, and those which are intended for all times and places.

Here’s Stackhouse’s conclusion: â€œWhen society was patriarchal, as it was in the New Testament context and as it has been everywhere in the world except in modern society in our day, the church avoided scandal by going along with it–fundamentally evil as patriarchy was and is. Now, however, that modern society is at least officially egalitarian, the scandal is that the church is not going along with society, not rejoicing in the unprecedented freedom to let women and men serve according to gift and call….This scandal impedes both the evangelism of others and the edification–the retention and development of faith–of those already converted….William Webb points out something that is obvious to many in the pews but is too rarely remarked on in the literature: The continuation of patriarchy by churches in this society puts a religious stumbling block in the way of those already converted.â€

(You go, John!) When my full essay-review is published, I’ll link to it. For now, check out Stackhouse’s book at Amazon (note reactionary ignorant customer review, an ongoing hazard for all thoughtful writers):
Finally Feminist.

Anyway, the day after the lecture I worked on my dissertation at the WTS library for most of the day, and then took part in a panel about education in which some of the panelists talked much more than others. But I got to stay with my friends Mel (windofhebel.blogspot.com) and Justin greenfieldsbeyond.blogspot.com) Moore, so that trip was worth it.

Just before leaving, I got an email from my editor, inviting me to the Norton cocktail party at BookExpoAmerica, the big ol’ publishing conference in May that everyone who’s anyone goes to (Peace Hill Press is planning on having a booth–more on this later). So naturally I accepted (although, alas, publishers usually highlight their fall titles at BEA rather than the spring books, so my upcoming book won’t get a lot of publicity at the conference itself). Now for one of those really serious questions: What do I wear?

I betcha Westminster professors ask themselves the exact same thing.