The maps have gone, and illustrations are going this week–I’m just waiting on one last image, of the Midas Monument, which I had to buy from Corbis. (For $425. They’re the expensive place.)

Now I’m in desperate need and throwing out a call to my readers. HELP. I need experts.

I’ve researched and researched and researched this book, but any professional will tell you that a non-expert, even one who researches obsessively, can make huge elementary errors in unfamiliar fields. This is quite different from the multiple inevitable small errors that sneak into long works, and which we’ll have to correct one at a time as we find them. Rather, I don’t want to use an outdated transliteration of a Chinese name, or chalk up a motivation to an ancient Indian emperor that every major historian in the field has dismissed…you get the idea.

For several months now I’ve been sending out emails to faculty members and graduate students at various history departments, begging for someone to cast an eye over a few chapters of the manuscript and offering to pay a reasonable honorarium. The only response I’ve gotten has been from Peter Enns and Mike Kelly at Westminster, both experts in the ancient Near East. (Thanks, guys.)
It’s a bad time of year, I’m guessing–everyone’s either grading frantically or writing papers–but at this point I think I need to widen my recruitment pool. I can make small changes in the galleys up until September, but I’ll have to pay for them if I make too many (it costs the publisher money to go back to the printer and reset pages).

So how about it, gentle readers? Any experts out there, on any area of the ancient world pre-Milvian Bridge? If so, drop an email to the office address ([email protected]), and they’ll forward it on to me.

In other news…the spring crop of baby chicks has arrived. You order them by mail, believe it or not. The Charles City post office, which is accustomed to such things, called us at 6:30 AM on Monday morning to tell us that the cheeping box had arrived, so that we could drive down and pick it up. 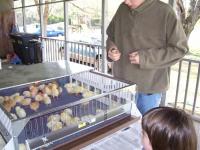 The chicks hang out in the brooder until they’re a bit bigger, and then we’ll shift them to a larger chicken house. When they’re big enough we’ll put them in with the adult hens.

My oldest son is the chicken manager (he feeds, waters, and makes a profit off selling eggs to the neighbors), but the younger ones are always happy to help out at baby-chick time. 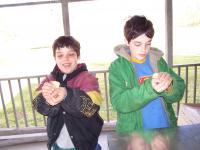 This unfortunately means that some of the older hens who have quit laying are, how shall I say, for the chop. An athletic hen tastes quite different from a store-bought, pen-raised chicken; there’s not nearly as much meat, but the flavor is more distinct and less bland. Good for chicken and dumplings. My father has found plans to build something called the Whiz Bang Automated Chicken Plucker which you can construct out of an old washing machine drum and various other bits of farm junk. No, I’m really not kidding. Yes, I know it sounds like something Wile E. Coyote would order from Acme. I’ll post a picture of it when it’s finished.