I’m back to work now.

So, in no particular order, here’s what’s occupying the brain of THIS working writer on the first day of December…

1. I’m waiting on the contract from Princeton University Press to be issued, at which point I’ll sign it, return it, and commit myself to delivering the manuscript along with the permissions for all images and quotes by February. (Would be nice for a book on political confessions to come out in the election year, wouldn’t it? When I find out a pub date I’ll let you know.) This means that my assistant Nancy and I are pestering rights departments at a time of year when NOBODY is particularly anxious to provide a quick answer. So far, Nancy is doing wonders at getting folks to call her back. The only completely uncooperative response has been from Jimmy Swaggart’s Family Worship Center, which answered her request for permission to reprint Swaggart’s apology sermon with a flat “No.” 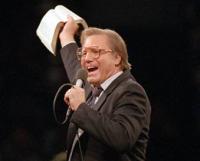 Which I suppose is understandable. However, the sermon was delivered in public and has already been reproduced multiple times, so I don’t actually think they can forbid us to publish a transcript. I was only asking to be polite.

2. After a stupefyingly long time, I have emerged from slogging through the details of the tenth century and am on to chronicling the eleventh. Now I’m getting into some REALLY extraordinary behavior…such as that of the Empress Zoe, who in 1034, at the age of 56, was widowed when her husband, the Byzantine emperor Romanos III, conveniently drowned in his bathtub. Zoe was less than crushed; she had only married him on her father’s orders anyway (her father had forced Romanos to divorce his own wife and marry Zoe instead). On the same day that Romanos III died, Zoe married her lover, the twenty-four-year-old palace chamberlain Michael. He then became Emperor Michael IV.

(Zoe, in a doodle on a Byzantine manuscript)

However, Zoe hadn’t been long married when she developed a crush on another young man, a court official named Constantine Monomachos, twelve years younger than she. 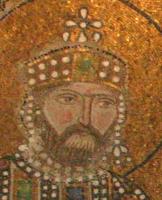 Michael IV was annoyed enough by this to exile Constantine to a distant island.

As Zoe was past producing an heir, Michael IV adopted his nephew (also named Michael, and only five years his junior) as his son and appointed him to be the next Emperor. The nephew-son didn’t have to wait long. Michael IV, although apparently quite good-looking, was also a bit of a weakling; he died at the age of thirty-one from a long-standing illness, after only seven years on the throne. Almost at once, Zoe had the nephew-son arrested, blinded, and castrated. He died, unsurprisingly, and she became senior ruler of the Byzantine Empire.

At this point, Zoe (who was now in her sixties), became reigning empress of Byzantium. At once, she called Constantine (aged 41) back from his exile and married him.

3. And speaking of Advent, I am highly pleased with myself because I remembered to buy Advent candles for the church wreath BEFORE the first Sunday in Advent. So I won’t have to make frantic calls on Sunday morning to find someone with five unused candles in their closet. Getting the Advent candles set up is one of those Lord High Everything Else jobs that the minister’s wife gets to do. This has nothing to do with my writing, except that it’s one of the things that clutters my mind like a mental dust-bunny until I get it done.

4. And speaking of things that have nothing to do with writing, but are occupying the parts of my brain that might be better used, take a look at THIS… 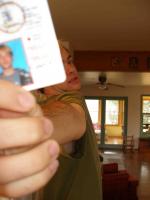 a sixteen-year-old with a BRAND NEW DRIVER’S LICENSE. Possums and cats of southeastern Virginia, beware.

I’ll let you know how the eleventh century is progressing; my ridiculously ambitious plan is to finish up a rough draft of the events in the entire book by Christmas, so that I can go back and start producing some decent prose instead of the excruciatingly boring stuff I’m currently putting on paper.

A few final thoughts upon returning home…Publicity
Got a title suggestion?Negotiations with my editor(s), Production