The contract from Princeton University Press has been negotiated, issued, signed, and returned. 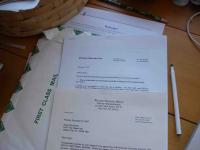 So now I have a question for you: what should the book be called?

Important details: The book traces the metamorphosis of public confession of sin. I argue that, over the course of the twentieth century, it changes from a religious ritual that takes place in front of fellow believers, into a secular rite that erring leaders HAVE to perform in front of their followers in order to hold on to power. I examine, in detail, the scandals surrounding Grover Cleveland’s illegitimate son, Aimee Semple McPherson’s disappearance, Ted Kennedy’s plunge into the creek at Chappaquiddick, Jimmy Carter’s Playboy interview, Jim Bakker’s tryst, Jimmy Swaggart’s voyeurism, and Clinton’s…well, everything that Clinton got up to.

My working title was THE ART OF THE PUBLIC GROVEL: SEXUAL SIN AND PUBLIC CONFESSION IN TWENTIETH CENTURY AMERICA. I really didn’t expect Princeton to hang onto that title, but my editor at PUP says that he likes “The Art of the Public Grovel.” (Although I should add that the outside reader of my dissertation, which had the same title, didn’t like “public grovel.” At all.)

However, he’d like to change the subtitle to: How Leaders Return to Power After Sexual Sin.

Which is a perfectly good subtitle. It’s just that (warning: academic-speak coming up) I want to be careful about implying that there’s monocausality behind, say, Clinton’s successful attempts to resist his removal from office. Clinton’s methods of confessing and apologizing DID play a big part in his ability to hang on to the good opinion of way more people than you’d expect. But it wasn’t the ONLY reason that he managed to stay in office.

On the other hand, this isn’t a strictly academic title–it needs to appeal to a wider readership, so I do need a title and subtitle that’s attractive to general readers.

So if you’d like to suggest a title and subtitle, please do. If we use yours, I’ll send you a couple of free copies of any of my books that you’d like. I’ve got a big box of the Korean version of the History of the Ancient World, if you happen to read Korean. It’s very beautifully done. (Once again, my Korean publisher takes the prize for production values.)

I’m in Princeton this week, as it happens, saying hello to my editor at Princeton, visiting my friend Lauren, and reading inscriptions from medieval south Indian kingdoms in the basement of the Firestone library. Tomorrow I’m headed down to Manhattan to consult with my agent and my editor at Norton; I’ll report on that as soon as I get a chance.