Tuesday night, Dan (thirteen) came charging upstairs after his nightly visit out to the chickenhouse to gather the eggs. “There was a huge snake wrapped around one of the chickens,” he announced, “but I whacked it with a shovel until it let go.” (And then he said, “The snake freaked me out so I need to play some computer games before bed to calm down.” But that was another conversation.)

We have the chickens fenced off from foxes, eagles, and stray dogs, but it’s impossible to keep snakes out of the nesting boxes. Black snakes slither up in there and eat the eggs. When I was a kid, we had what seemed like HUNDREDS of chickens, and it was our job to feed, water, collect eggs, clean and grade eggs, and sell eggs. If you weren’t careful about sticking your hands into nesting boxes, you’d find yourself patting a snake. In fact, one of the enduring memories of my childhood is putting my hand under a sitting hen to check for eggs and discovering that she was SITTING on a blacksnake which was busy swallowing the eggs in the nest while she was laying more.

Chickens are not so smart.

I never saw a snake do anything to a chicken, though, so this snake clearly has delusions of boa-constrictor grandeur. Apparently the chicken in question survived the shovel-whacking and staggered off to recover, so the squeezing was ineffective anyway.

Last night Dan came thundering back upstairs again (these snake emergencies always happen after Pete and I are in bed, I’m not sure why) and announced that Ben (nearly seventeen) had caught the snake. Turns out Dan had been tracking the snake’s habits and figuring out when it visited the egg buffet every night, and last night he dragged Ben out to help him catch it. “And he’s got it downstairs!” he finishes up. “It’s HUGE! Come see it!”

It was a really big snake. A six-footer. 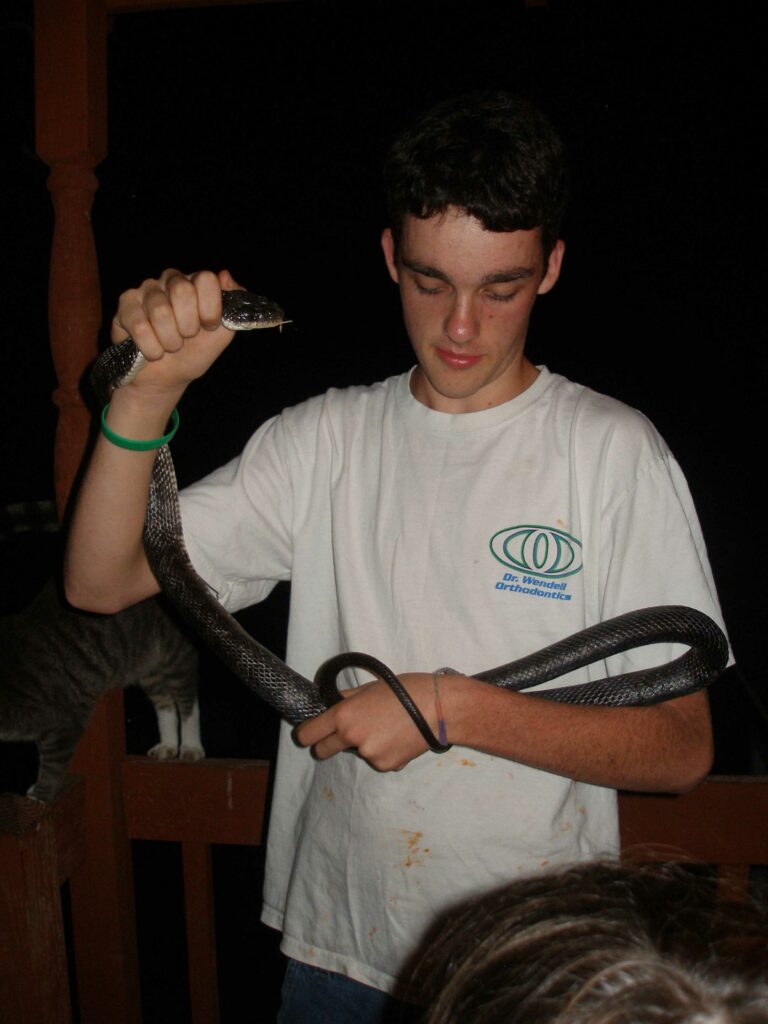 This morning at breakfast, I say to Ben, “Where did you free the snake?” (Black snakes drive out copperheads and eat rats, so we never kill them; we just keep moving them out of the henhouse.)

“Oh,” Ben says, “it was dark and the snake was kind of hard to hold, so I just let him go down near your office.”