Star has just emailed me to say, “The art department wants to know if you have any ideas about art for the front.” He thinks that an action scene of some sort would be preferable, since it goes along with the story-telling style of the book.

Any ideas? The book ends, by the way, with Constantine at the Milvian Bridge, which I’m arguing is the end of the old idea of Rome (as opposed to the traditional sacking of the city by barbarians). So we can’t use anything that happens after 312 AD.

Nor do I want one of those covers with Greek marbles on it. They’re just not very active. And not very colorful.

My best idea right now is to use a later painting of the Battle of Milvian Bridge itself. The front-runner so far as I’m concerned is this 1613 Pieter Lastman: 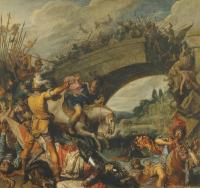 Great color and movement. But maybe a little gory? Anyway, please make some suggestions here. What would make you pick up the book?