Starling Lawrence called yesterday to tell me that the manuscript was on its way back to me and would arrive this evening or tomorrow morning. He’s made various suggestions for clarification (apparently my account of the war of the Kauravas and Pandavas in ancient India left him scratching his head), but he doesn’t think the revisions will take me long. Good thing, since I’m still supposed to get it back to Norton by February 6.

So I’m looking out the window for the delivery, since drivers who aren’t familiar with our farm tend to drop packages on the porch, where they are fair game for Noodles, the omnivorous beagle. 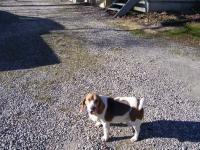 Noodles, licking his lips at the thought of an irreplaceable edited manuscript.

In the meantime I’m frantically working on the maps, which play a very large role in the narrative. There’s a map in almost every chapter, and I’ve only finished about half of them, since the manuscript had to be pretty close to finished form before I could start on them. The total lack of maps in most histories drives me absolutely nuts. History books, particularly popular books (as opposed to textbooks) tend to be weirdly gnostic, as though the surface of the earth and water didn’t really matter all that much. And yet the same mountain passes, harbors, and valleys stand at the center of conflict after conflict, which suggests to me that the landscape is important enough to be included in the story.

An example: When I was writing Chapter Sixty, about the early republic of Rome, I discovered that one of the earliest treaties between Rome and Carthage (recorded by Polybius) stated that Carthage and Rome would remain friends as long as Roman ships didn’t sail any further west than Fair Promontory. Well, I don’t know where Fair Promontory is. Did any of the forty-two histories of Rome stacked on my floor give me a map? They did not. Did anyone describe where this might be? Nope. I did half a days’ worth of digging before I discovered that Fair Promontory is the modern Cape Bon, and another hour before I found a decent map. I haven’t drawn my own for this chapter yet, but here’s a map I borrowed from the Ancient World Mapping Center (www.unc.edu/awmc):

Fair Promontory is the little finger of land just right of Carthage.

What’s really fascinating is that, two thousand years later, Fair Promontory was still a dividing line between armies. In 1943, the Axis forces in North Africa were forced into surrender when General von Arnim surrendered at Cape Bon–according to the The Guardian (May 13, 1943), â€œon the extreme tip of the peninsula.â€ Two days earlier, the Allied forces had â€œcut off Cape Bon from the mainland and penned its enemy garrison in the mountainous roadless interior of the peninsula,â€ while Allied naval and air forces blocked any attempts to evacuate Cape Bon by sea–a strategy which E. A. Montague, the Guardian war correspondent, referred to as Germanyâ€™s â€œhope of a Dunkirkâ€ (after the evacuation of Allied troops from occupied France in 1940, in the face of the German advance).

Now you tell ME why no one puts this on a map.

Starling Lawrence has been very understanding of my insistence that the books needs lots of maps, even though they take up plenty of space. So I’ve been working away at drawing maps, and since I’m no artist, I’ve hired the wonderful Sarah Park to take my hand-drawn scribbles and turn them into works of art. Here’s what I gave her to illustrate Chapter 17, “The First Monotheist,” which covers Abram’s wanderings:

This is drawn on a base map which she made for me.

Here’s the finished map for 17 (there are a couple of funny marks on this file because it’s an InDesign file, made for typesetting, not for blogging).

Maps can give you a real glimpse of another way of seeing. It occurred to both of us simultaneously that, since the ancient Egyptians always faced south towards the Nile stream, that it would give a more accurate picture of their world if we oriented their maps south to north, the way they understood the landscape: 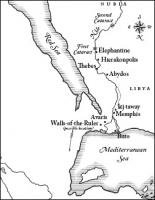 Amazing how much it changes our perspective to shake up that traditional north-south axis. I’d love to know when it became accepted practice to put north at the top of a map. There’s no compelling reason to see the world in this way–and yet how “natural” it seems to us!

Fortunately, the maps don’t have to go into copyediting for another month, so I hope we’ll be able to finish them up on time. Right now I’ll stop blogging and go back to drawing. Our wonderful UPS driver has just arrived without the manuscript, so I’m guessing Norton sent it FedEx. The lookout continues. 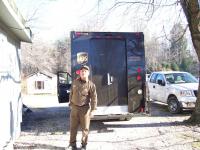