This past Thursday I took off to New York for the yearly national publishing conference, BookExpoAmerica. Last year the conference was in DC, and next year it’ll be in L.A.

This year, though, it was in the Javitz Center in Manhattan, a huge and very badly air-conditioned venue stuffed with hundreds of publishers, thousands of books, and an unbelievable number of people, both outside the exhibit halls 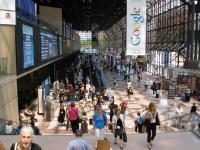 and inside them (there were three floors of exhibit booths). 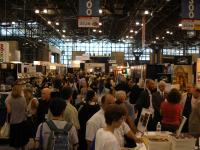 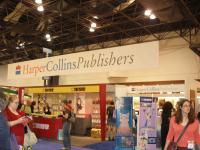 to the very small. 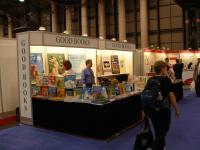 (I wish I’d thought of that name for our company.)

And of course, we were there. 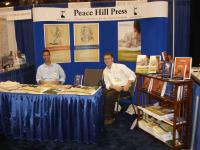 Peter and Charlie came up earlier in the week and did all the hard work of setting up; I came in once all the sweat-work was done. I flew up on Thursday and went to the BookForum party on Thursday night; this was held in a concrete-floored art gallery which was as hot as the Sahara and as loud as a Boeing 747 by the time I got there. It was impossible to talk, impossible to hear, and close to impossible to move. I have limited experience of book parties, but so far all the ones I’ve been to are like this. There must be some segment of the population which equates Noise/Heat with Good Time, but it doesn’t include me.

At BookExpo, our main goal is to get books into the hands of teachers and librarians. We also make contacts with foreign agencies and publishers who might want to buy translation rights to our titles–last year we sold Chinese language rights, and this year we have serious inquiries from Mexico, Iceland, and Egypt. If the books sell through into those countries, I’ll let you know.

BookExpo also has a contingent of unpublished writers who wander through it, hoping to attract the attention of a publisher by dressing up in strange costumes and otherwise making themselves conspicuous. Last BookExpo was distinguished by the presence of a guy who had written a novel called “Toilet” and spent the whole conference strolling around through the aisles with an actual toilet on his head (which stuck up through the bowl). This year we had My Name Is Scott 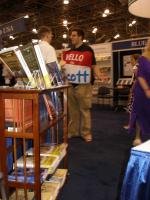 and a guy dressed up as God who was promoting his book on atheism. (He had a sign around his neck saying “Out of Work.” I’d have gotten his photo from the front, but I was kind of afraid that if he saw me taking his picture, he might come and talk to me.) 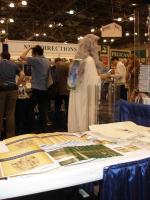 Publishers also schedule signings for their authors at BookExpo. This year, one author did his signing from California, using a nifty new invention called the Long Pen. 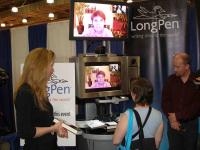 He talked to the autograph seekers via video screen, and when he signed his name on the west coast, the pen in New York moved to reproduce his signature. I’m not quite sure what the point of this is–I’m not an autograph collector, but I always thought the motivation was to be in the presence of the author. Yes, I guess he IS present, in a gnostic sort of way….but still.

Heading home now from Newark. Will post next week as we get back to regular school again…

My husband just emailed me the photo of Pete After Three Straight Days of Kid Duty. 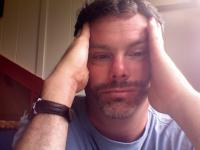 Awww. Time to go home and make cookies for that man.