What with travelling and beautiful spring weather, I decided that May would be a good month for the kids to have some time off school. We don’t usually take a summer vacation; everyone gets bored after three or four weeks, and anyway no one wants to go outside in Virginia in July or August. So we do school year round, which allows us to take breaks whenever we need them.

And I REALLY needed a break in May. My mother always says that everyone wants to quit home schooling in November, February, and May. So true.

However, now it’s back to work. Monday is our day off (we do Saturday school instead) and Tuesday we went to the library, so Wednesday (my husband’s long day at work) was our first full day back. 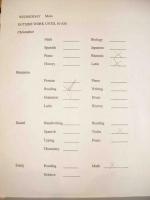 We have one of these for each day of the week, generally divided into Mom and Dad columns, so that we have a fighting chance of getting everything done.

Today’s big challenge was getting Christopher (aged 15) back into his Latin. Doing the first translations after a break is always very patience-intensive. For both of us. Usually by the end of the first exercise I have announced at least once that I am not his artificial brain, and that if he doesn’t remember a construction, he’d darn well better look it UP instead of gazing at me with huge wistful eyes until I give him the answer. 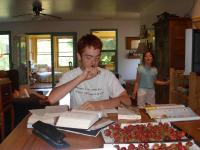 Today’s exercise was slightly complicated by the fact that Emily (six) had finished her school (she doesn’t do more than about 45 minutes a day right now–she’s technically not starting first grade until September) and was sprinting around in the background. 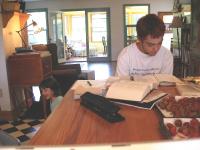 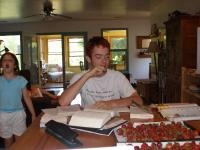 Fortunately, there’s enough of an age gap between Christopher and Emily (I have two sons in between them) for him to take this with relatively good humor. 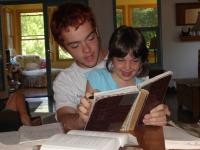 If you can’t silence ’em, bore ’em to death. 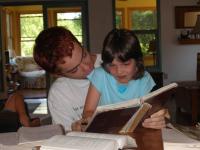 I personally have never thought that Latin is central to the goals of classical education–or, more precisely, neoclassical education (which, as I have repeatedly pointed out, is what all modern classical educators do). I’ve read the texts of the neoclassicists who suggest Latin should be at the center of education, and I remain unconvinced. Latin-based learning was, indeed, a staple of ancient schooling, but I have no huge desire to reproduce the educational standards of ancient Rome.

In researching the medieval world, I came across a chapter in Peter Brown’s brilliant study Power and Persuasion in Late Antiquity which strengthened my reservations about over-focusing on Latin. Late Roman education, Peter Brown points out, was designed to instill in young men all over the Empire a shared sense of culture–for the purpose of uniting them in an aristocratic, elite ruling class, one which would hold together in the face of challenges from an increasingly diverse set of working-class Roman citizens. It allowed them to treat each other as friends, and to claim friendship with those in power–a friendship “based on the mutual admiration that sprang up quite naturally between educated persons” who knew the same books, the same philosophies, and the same drinking songs. They were the initiates; their education allowed them to hold themselves apart from the lowborn and uneducated. (This is, of course, in the third and fourth centuries; I’m tracing this same theme backwards into the older Roman empire now, although since I’m supposed to be moving towards the present, not away from it, I’ve got limited time.)

Anway, I find this a compelling and disturbing account of the purposes of language-centered education in medieval times….and it made me stop and think again about why I’ve insisted that my children do Latin. In the end I hold to Latin as one of the best possible tools for shaping English language skills–analogous to the five-finger exercises that make it possible to play an immense variety of piano compositions. It isn’t the only language we do: Christopher has been studying Japanese with a tutor for the last two years, Ben (13) is learning Farsi (his choice) and Daniel (10) and I are working on our Spanish together. (And I’m trying to pick up enough Korean to hold a polite conversation, but that’s another story.)

I’ve seen both of my older boys improve immeasurably in their writing since studying Latin–which is, for me, the proof of the pudding. Frankly I have no real desire for them to read Latin literature, which is primarily derivative and (in my opinion) second-rate. Certainly I do not want them to join a cultural elite which holds itself apart from “the rest” (those would be the ones Christ tells us to love, right?)

I do want them to handle their own language with perfect ease, and Latin (which I studied myself for years) has proved a first-rate tool for this purpose. But not the purpose itself.

Any of my readers out there want to chime in?

(And before you ask, Christopher is using my old Jenney text. I don’t usually recommend it, because you can’t really teach it unless you’ve studied Latin yourself, but since I’m so familiar with it I decided we’d ditch our other home-school-friendly options and go back to what I already knew.)

I should clarify: I’m not suggesting that modern Latin-centered educators are motivated by a desire to join a cultural elite and shut off the rest of the world. But I do question the wisdom of reproducing a style of learning which was intentionally constructed for just that purpose…

Dispatch from BookExpoPublicity
The day may come when I will write a REALLY good sentence. But it is not this day.The raving writer