Since a number of my readers have asked about the Whiz Bang Automated Chicken Plucker, I’m happy to report that it had its first outing yesterday. (Click on any picture for a larger version.)

The experiment began with that vital first step, so central to all Virginia farm rituals: all the men stand around and discuss the equipment. 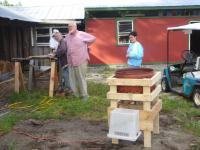 From right to left, that’s my twelve-year-old Ben, my father, Shirley (the grandfather of my first cousin once removed), and Vince (our neighbor from across the road). And, in the foreground, the Whiz Bang. 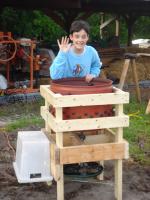 Ben gives it one last once-over, 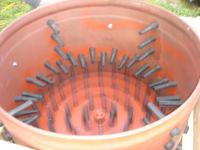 and then we turn it on to make sure that it whizzes and bangs properly.

Meanwhile, my mother visits the chicken pen to scope out the likely pluckees. I will spare you photos of the execution, but it is quick and painless, and chickens really do run around in circles if you cut their heads off 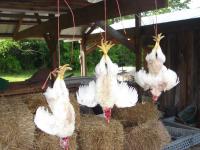 Here they hang on the edge of the sawmill, waiting for plucking. 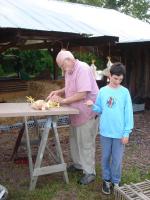 Ben is, at this moment, not so sure that he’s going to partake of the fried chicken later on. 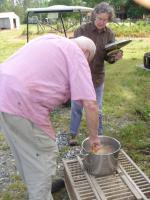 The first step in cleaning the chicken is to dip it into scalding water, which Mom has just brought out from the house. 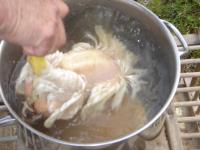 This loosens the feathers. (It also smells revolting.) 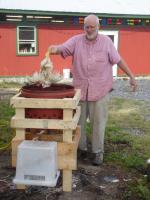 Then the chicken goes into the Whiz Bang,

and bounces around in there while the rubber fingers pull off the feathers. After a few minutes it becomes obvious that the water wasn’t quite hot enough to loosen the feathers properly,

so Mom and Ben head back up to the house with the kettle to reheat it. (A golf cart is one of the most useful farm vehicles around.) 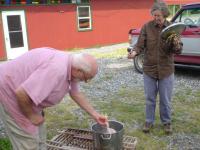 They come back with boiling water and a thermometer, so that we can keep an eye on the water temperature, and the chicken gets re-dipped and then goes back into the Whiz Bang.

And this time, when it comes out, 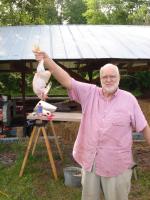 it has been beautifully plucked. With the water temperature kept at the proper level, the next chicken only needs one dip and one whirl in the Whiz Bang, and the feathers fly right off. 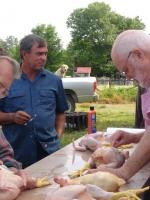 By the time my first cousin (not removed at all) drops by, the chickens are almost all finished. In record time.

And here’s the final product, headed for the fridge. My mother cooked one of the hens last night and reports that a two-hour baking time makes them tender, and that the breasts stay juicy. Tomorrow night I’ll be roasting a couple for our dinner.

Now, back to the history of the medieval world…

BookExpo in DCPublicity
Vancouver, that author questionnaire (again), and the book goes to compositionProduction, Publicity