It’s Saturday night, around 10 PM, and my sorely missed husband is due back at 2 AM. After we all do church on Sunday and then crash on Monday, it’s back to a normal work week, and those page proofs for the History of the Ancient World, which looked like this two weeks ago: 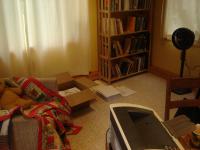 because I haven’t even started on them. I DID do a bit of work on the second volume this week, working my way through the first five Gupta rulers of medieval India in between mom-duties. But since Wednesday night, we’ve been dealing with Ernesto, the tropical storm which (unexpectedly) sailed right overtop of us and dumped ten inches of rain on the farm. It also knocked out power, washed out roads, and blew a zillion maple branches all over the lane, so Emily, Dan and I have been trying to clear them up. 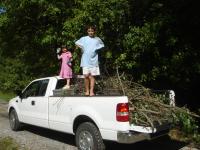 We spent today piling them up in the truck and then dumping them into the burn pile, which has been doubling as a backstop for target-shooting (which is why it hasn’t actually gotten BURNED yet).

Across the road, my cousin’s cornfields are beaten down almost flat; the cornstalks are bent double.

He hasn’t begun combining yet, and I’m not sure whether he’ll be able to save it–I’ll ask him at church tomorrow.

A less dire problem: the bunny hutches got swamped and had to be cleaned and dried out. I resisted rabbits for a long time, because they’re useless (unless you eat them, which became a non-option after the kids had cuddled them for about five minutes). They don’t lay eggs, or trim the grass, or really do much of anything. Except get loved. 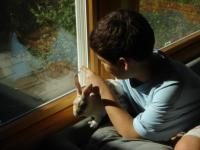 (Daniel and Zork, the world’s most placid mini rex. Or else he’s just clinically depressed and can’t be bothered to move–hard to say.)

So we’ve cleared the road, dried off the bunnies, scooped twenty pounds of leaves and twigs out of the pool, shaken out all the soaked dog bedding, and mopped up all the leaks. Now the temperature has dropped thirty degrees, the sky has that gorgeous post-hurricane look, and it smells like fall time. 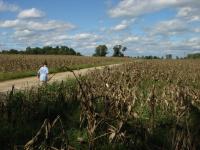 Update on those page proofs coming NEXT week, I swear.

The Next Morning’s AddendumCoping with the farm, The raving writer
The arrival of the ARCs, and a raffle offer…Production, Publicity