Today a big box arrived from Norton, filled with my ten copies of the ARCs–the Advance Reader’s Copies, otherwise known as galleys. 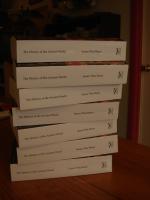 These are paperback, bound copies of the first pass typeset pages (errors and all), made expressly for the purpose of sending copies out to reviewers at journals and magazines which have a long lead time–a long time between the point at which the writers turn in their articles and reviews, and the time when those articles appear. Newspapers do this in twenty-four hours; a lot of magazines need three or four weeks or more, plus time for the reviewer to read the book and write the review.

Hardback copies of the book won’t be manufactured until January–after I return the first pass, the corrections have to be made (which will shift the page count), the book needs to be indexed, a final page count has to be made before the spine can be designed, the back cover and flap copy has to be finished…and then the book can take anywhere from 4 to 8 weeks to be printed and bound. So the ARCs give reviewers extra lead time; that way the reviews can come out right as the book’s being released, rather than weeks or months afterwards. 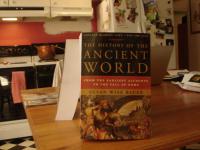 The front cover of the ARC is a paperback version of the final front cover (click on the pictures for a larger version). 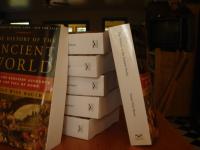 The spine is printed on a plain white background,

and the back cover reproduces the information from the catalog page, along with a warning that quotes should be checked against the final (corrected) book.

Inside, the typesetting is close to its final form, although the graphic quality of the maps and illustrations is not very high.

It’s illegal to sell ARCs; Norton gives them away, and no one is supposed to market them as a cheap version of the finished book. ARCs occasionally pop up on eBay (do a search, and you may see a few). I don’t know what other publishers do, but Norton sends cease-and-desist letters to sellers who insist on auctioning off ARCs.

But I can send a few of them out for free. “Few” being the operative word. There were ten in the box. Three went to Peace Hill Press folks; I’m keeping one; I’ve already promised three to various expert readers….

So if you’d like a copy, way ahead of publication, here’s the deal. Post a response to this blog entry. On Monday, September 25, I’ll write down all the names of the people who have posted comments and toss them into a hat or something, and send an ARC to the person whose name I draw out first.

Not really a raffle, as you don’t have to buy anything to enter. But you do have to write a comment… and make your presence known.