So Tuesday I finished a manuscript, and now for the first time in seven years I’m not playing catch-up with my writing. 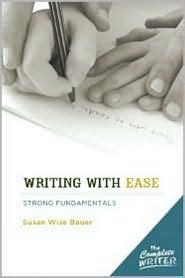 The manuscript was the last workbook in an elementary writing series for Peace Hill Press, the small press I own. (We are, without question, the most famous publisher in Charles City, Virginia.)

I have a real passion for teaching writing, particularly to the kind of kid who weeps hysterically when you give him a pencil. It comes from years and years of teaching writing to college freshmen who never learned the basics, and thinking to myself the whole time: What should you have learned before you walked into this classroom?

This last book in the Writing With Ease series is scheduled for publication in January 2010, which means that the manuscript was supposed to be finished in mid-June. But, naturally, I’ve been running behind. So this week, my husband took the kids off to visit cousins and I stayed home to fulfill a speaking engagement, feed the horses/chickens/cats/dogs/rabbits/goldfish, and work on the final draft of the book. I worked nonstop until yesterday and…finished it.

For at least the last seven years, I’ve constantly been working on books which are already in the system–already listed for sale in our catalog or Norton’s catalog, which means already available for pre-orders on Amazon, B&N, Books-a-Million, you name it. This is not quite the same as working on a deadline. Deadlines are necessary, for me anyway, because if I don’t set a target date for finishing a manuscript I’ll just keep researching and writing and researching and writing and editing and tinkering and rearranging. But deadlines, as long as you have a sympathetic editor, are semi-flexible. If the book goes in an unexpected direction, or you end up with unanticipated difficulties, a deadline can be pushed.

Once a book is in the system, though, you’d better get it finished on time. Otherwise there are cancelled orders, indignant readers, annoyed bookstore owners, and general unhappiness.

When the book goes into the system is actually under my control. My PHP books don’t go into the Peace Hill Press catalog unless I put them there myself. And my editor at Norton always says to me, a year before my next deadline, “So, is the book on time?” And I give him an estimate as to when the manuscript will be ready.

I am always wrong. You’d think that after more than a decade of doing this for a living, I’d have a better sense of how long it’ll take me to finish a project. Apparently not.

So why do I keep saying, happily, “Sure, let’s put the book in the catalog, I’m sure I’ll be done”? Because if I were to wait until the manuscript were actually finished before giving the OK to list it, publication is delayed by an additional year or more. And the unhappy reality of publishing/writing for a living is that new books have to keep on coming out.

But I made a resolution back in December, when I sent the manuscript for the History of the Medieval World in. The resolution: as soon as I finished the two remaining books in the writing series, both of which were already in the system, I would never again say blithely, “Of course I’ll have it done in time! Put it in the catalog!” Not unless I have a finished manuscript in hand.

Why? Because once there’s that inflexible date at the end of the creative process, writing changes character. With each page, I no longer think: Hey, that was a pretty good page. Instead I think: That took too long. Must be more productive. It’s wearing and exhausting and joy-sucking.

So here I am. Without any unfinished books in the system anywhere. I’ve got new projects I’m looking forward to starting on–the next book in the Norton series, above all. But that familiar panicked drumbeat echoing around in the back chambers of my brain? Silenced for the first time in seven years.

Listening to the silence.