After struggling with the copyedits on the Art of the Public Grovel, I got exasperated and begged the good folks at Princeton to PLEASE assign another editor to the project. (I was actually coping with the multiple rewrites, although my red-pencilled STETS were growing darker and bigger as my pencil dug deeper and deeper into the paper, but when I discovered that the freelance copyeditor was actually introducing NEW errors into the text I gave up.)

So the MS went back to Princeton and has now been given a thoroughly competent copyediting. It’s been an interesting experience. Copyedited pages always look they’re bleeding because the editor makes typesetting notations all over them. 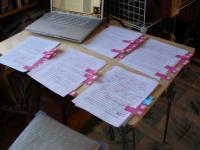 But these pages were really, thoroughly copyedited. The editor suggested a number of alternative phrasings throughout, some of which I accepted, some of which I didn’t. (Since there’s a fair amount of theology in this book I have to be particularly careful about word choice: for example, “privacy” and “secrecy” are not at all the same thing when you’re talking about the Catholic practice of confession.) I haven’t gotten this particular kind of copyedit before. My editor at Norton always says how nice it is that I can put clean sentences on a page, and the copyedits on the books I’ve done for them have pretty much been confined to correcting inconsistencies in punctuation, citation, and so on.

This copyedit has me pondering such questions as: Is it better to say that elected officials “had the duty of satisfying their constituency” or “were obliged to satisfy their constituency”? Is it clearer to say, “Randolph is here arguing that confessions progressively move the sinner closer and closer to salvation,” or to say “Randolph argued that confession moves the sinner progressively closer and closer to salvation”? 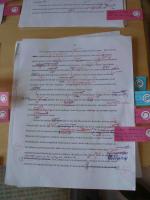 I generally read manuscripts out loud when I’m working on final phrasing; something I tell my freshmen writers to do (not that they ever listen). Those phrases sound very different to me. It’s astounding how much a small change can shift the feel and sound of a sentence, and the feel and sound are important. Language is like music. Add or subtract an instrument, change a note, and you’ve got something different, even if the melody remains the same.

I remember Madeline L’Engle saying how distressed she was when her publisher changed her spelling of “grey” to “gray” throughout one of her novels–A Wrinkle in Time, I think (although I could be wrong.) For her, “grey” was a soft, warm color, while “gray” was a hard, battleship color, and the spelling threw off her entire picture of the world she was building. I know exactly what she means.