You guys are good. 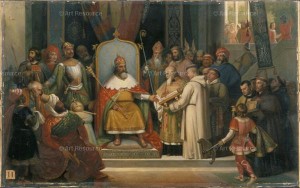 The painting is by Jules Laure (1806-1861). It shows Charlemagne receiving manuscripts from his tutor, the monk Alcuin, around 781.

Charlemagne is a good choice for the cover of the History of the Medieval World; he represents one of the main themes of the book, the growing tendency of kings to claim divine Right instead of mere Might as a justification for conquest and domination. Here’s a brief excerpt from my chapter on Charlemagne:

Charlemagne had gathered around him a royal circle of scholars and clerics who were filling in the early gaps in his education (he had received much more military training than book-learning from his father, and had never learned to write); they not only discussed with him the finer points of theology, philosophy, and grammar, but they called him â€œKing David,â€ after the Old Testament monarch who was hand-picked by God to lead the chosen people. Under the guidance of his personal tutor Alcuin, a British churchman whom Charlemagne had recruited to teach his sons, the king of the Franks developed a stronger and stronger sense of mission. His conquests were, in his own eyes, forceful evangelism: bringing the Gospel to stubborn unbelievers who needed to be saved not just from their sins but from their own unwillingness to hear.

Earlier in the decade, he had concluded a campaign against the Saxons with exactly this sort of persuasion. The Saxon resistance to his rule and the Saxon toll on his army had so angered him that, in 782, he had ordered 4500 Saxon prisoners to be massacred. Their leader Widukind had escaped, but after three years on the run he had finally been forced to surrender. As part of his surrender, Widukind had to agree to Christian baptism; and afterward Charlemagne decreed that any â€œunbaptized Saxon who conceals himself among his people and refuses to seek baptism, but rather chooses to remain a pagan shall die.â€ A Saxon who stole from a church, or did violence to a priest, or indulged himself in the old Saxon rites instead of Christian worship, would be put to death. And any Saxon who did not observe Lent properly would be executed.

To his credit, Alcuin objected. â€œAbate a little of your threatening,â€ he told the king, â€œand do not force them by public compulsion until faith has thoroughly grown in their hearts.â€ Charlemagne considered the argument and agreed, revoking the death penalty; but this did not change his sense of duty. He was not bringing merely salvation, but right doctrine and practice, to the western world.

Incidentally, my alert colleague Justin points out that the painting is reversed on the cover of the book. I’m not sure why the graphic designer at Norton flipped it; I’m sending a note to find out whether it was intentional.

And since this is actually supposed to be a blog about the History of the (Whole) World…Production
Week 4’s book: What about Hitler?What I've been reading