Books for the last three weeks: two more disaster books, and a play.

I think I’m almost off my disaster-book jag here, but I had two more on my stack and decided to read them as a follow-up to A Wall of White and Into Thin Air.

Week 28, The Children’s Blizzard by David Laskin: intermittently gripping, so grade B+.

This is an account of the January 12, 1888 blizzard that swept down through Minnesota and the Dakota Territory into Nebraska, Iowa, and Kansas. 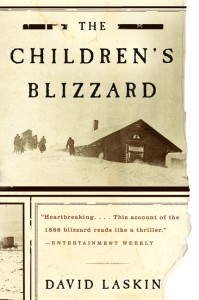 It killed hundreds of people, including scores of children who had been sent home from school when bad weather loomed and were caught on the prairie by the storm. Vivid descriptions of the catastrophe, including this quote from a South Dakota man who saw the blizzard approach:

We were all out playing in our shirt sleeves, without hats or mittens. Suddenly we looked up and saw something coming rolling toward us with a great fury from the northwest, and making a loud noise. It looked like a long string of big bales of cotton, each one bound tightly with heavy cords of silver, and then all tied together with great silvery ropes. The broad front of these cotton bales looked to be about twenty-five feet high; above them it was perfectly clear.

An excellent step-by-step account of the storm; once I got halfway through, I was engaged enough to stay up late finishing it. The book did suffer a bit from awkward backstory insertion, particularly right at the beginning before the reader’s attention was thoroughly seized; right after the preface, Laskin goes all the way back to Scandinavia before the Norwegian immigrants leave for the American prairies. He nearly lost me there. Plus, he halts the narrative way too long to tell us all about nineteenth-century methods of predicting the weather. But his story is definitely worth a read, and the conclusion told me something I didn’t know about the Great Plains of today:

Out-migration is on the rise once more. Nearly 70 percent of the counties in the Great Plains states have fewer people now than they did in 1950. These days nearly one million acres of the plains are so sparsely populated that they meet the condition of frontier as defined by the Census Bureau in the nineteenth century….Indian and buffalo populations have now reached levels that the region has not seen since the 1870s….in large stretches of the prarie it’s beginning to look like European agricultural settlement is a completed chapter of history. “It’s time for us to acknowledge one of America’s greatest mistakes,” wrote Nicholas D. Kristof on the op-ed page of the New York Times, “a 140-year-old scheme that has failed at a cost of trillions of dollars, countless lives and immeasurable heartbreak: the settlement of the Great Plains.” The blizzard of January 12, 1888, was an early sign of that mistake.

Fascinating. Intend to find out a little more about this. (Is Kristof’s view peculiar to him, or shared by others?) 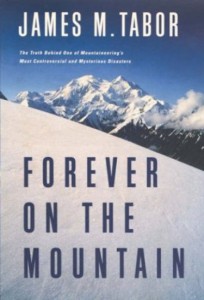 I really, really wanted to like this book, which is a carefully researched account of the 1967 expedition to Mount McKinley in which seven men died and no rescue was launched. It was clear and interesting but Tabor’s style drove me nuts. He uses the present tense for much of his retelling, which fits chick lit better than history, even recent history. It obscures the distinction between what Tabor knows and what he guesses, and it also forces him to make strained use of past and future tenses: here’s a passage describing the doomed expedition in the middle of the storm:

Fatigue and altitude are dragging all of Jerry’s men down. They have been without food and water probably for twenty-four hours now. Jerry may think vaguely of trying to take off his boots and massage his feet, but the effort required will seem insurmountable….Jerry will understand better than the others what is happening, having learned more about high-altitude and cold-weather physiology during his Antarctic training. He will not say this to his friends, because he doesn’t want to frighten them, but Jerry must know that if the storm doesn’t break soon, some of them will be unable to move and could die right here. Given the way he’s feeling, he could well be one of them.

Those tense shifts are so weird (to my ear, anyway) that I had to stop and puzzle them out right when I should have been transported by the story. Plus, Tabor further confuses the issue when he refers to present-day interviews he conducted with the survivors. Those also go back and forth between past and present tense. Additional distraction: Tabor uses quotation marks for dialogue which he can validate, and no quotation marks for dialogue he’s inventing…something which I didn’t figure out until the very end of the book. Bottom line: not as effective as it could have been. 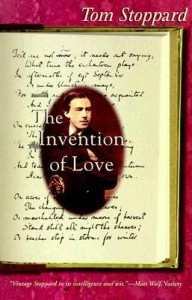 I picked this up on a whim because I have fond memories of reading Rosencrantz and Guildenstern Are Dead about fifty times in college, and because I haven’t read a play since I finished writing the drama section in The Well-Educated Mind. Possibly my play-reading skills are rusty. But man, did I struggle with this one, which I’m tempted to think is only going to appeal to Brits over fifty. It was premiered in the U.S. in 2000 (with James Cromwell in the leading role). I have to wonder what that was like. I mean, with lines such as “Affability is only suffering the fools gladly, and Cambridge afford endless scope for this peculiar joy. I introduced creme brulee to Trinity, but if that isn’t enough I’ll talk to people. Do you still ride a bicycle?”

I have a stack of new plays to read, though, so maybe I’ll revisit this one once I’m back into drama-mode.

My adventures with Amazon.com’s Author PagePublicity
Twitter Weekly Updates for 2009-07-26The raving writer