Time for another update on the 52 Books in 52 Weeks challenge.

I’m reading novels right now. Still feeling massive post-manuscript burnout (I need to post some more reflections on this but that would mean WRITING) and I’m trying to recover my story sense. And also my brain is too tired for nonfiction.

So in the last two weeks I’ve read three novels–two entirely redemption-free and the third with no apparent reason for existing. 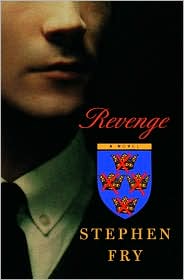 A reasonably entertaining updating of the Count of Monte Cristo, until the end anyway, when instead of hard-won peace, the hero becomes exactly like the men he seeks vengeance upon. Actually that sounds like it might be quite poignant and meaningful, but it isn’t; Fry takes too much nasty delight in the exact tortures that the one-time victim inflicts on his enemies.

I like A. N. Wilson’s prose, even if I’m perpetually glad that I don’t live in his universe. This was a beautifully written novel, even though it 1) didn’t throw any real light on why an agnostic would choose to be an Anglican priest, 2) featured a completely unlikely set of romantic alliances, and 3) ended with a toe-cringing scene where the one-time priest faced up to the complete emptiness of his calling. I won’t ruin the climax for those of you who want to read the book; I’ll just say that if that’s a secular redemption, A. N. Wilson can have it.

I picked this up because it was on the end shelf at the library and I had to get on a plane and wanted to read something that didn’t demand a fully oxygenated brain. I finished it thinking: What editor decided to buy this, and why? There was nothing strikingly wrong with it; it just had absolutely no reason for existing. Undistinguished setup, undistinguished characters, predictable plot, resolution visible about fifteen pages in. I only finished reading it because I didn’t have anything else in my bag. And yet William Morrow published it, and Ms. Grayson seems to have gone on writing novels. Amazing.

Does anyone want to suggest their favorite novel for me to read next?