You’ve probably noticed that I missed last week’s post. We’ve been moving the blog from one server to another, which kept me from posting for a few days (and may have kept you from READING for a few days). However, the domain name seems to be properly redirecting, so it’s time to catch up.

Last week (Week 5) I spent a good bit of time in a hospital with a family member. All is well and we’re more or less back to normal now, but I’ll tell you something about hospitals–it’s impossible to read anything serious when you’re there. Even if you’re not the sick one. So I decided to take advantage of one of the “52 Books in 52 Weeks” rules and reread a mystery I first read several years ago: P. D. James’s Death in Holy Orders. 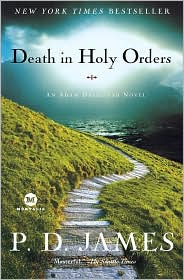 (I also read about three-quarters of an epic fantasy by George R. R. Martin. It’s been years since I wanted to read an epic fantasy, and I’m not sure why this one was so satisfying, except that it was on my Kindle, which was in my purse, and I was in the mood for it. Didn’t realise until later that George R. R. Martin was one of the writers for Beauty & the Beast–does anyone remember this series? I adored it when I was eighteen because it was SO ROMANTIC. Now I just want arms like Linda Hamilton’s.)

I’m a big James fan, and I enjoyed this book, but I do have a few random observations which are less than glowing…

The Baronness’s age is showing. Every one of her sympathetic characters, no matter what age, race, or gender they are, at some point goes into an internal monologue about how 1) no one in school learns how to read or write properly any more and/or 2) all that PC stuff about racial inequality is SO overblown–there’s no such thing as prejudice any more. Even more jarring is her highly sympathic portrayal of a priest convicted of sexual abuse of choir boys (“It wasn’t really abuse,” one of the characters explains, “just fondling, nothing violent”) and her obvious disapproval of the church authorities who insisted on prosecuting him (they had a “vendetta” and ruined his life by forcing him to confess). AGGHH. Ick.

Second: It’s astounding how highly rationalised the Church of England appears to be, in the world of this book. It’s like a tightly structured corporation with a set of rituals that have to be performed at certain times and places just for the purpose of keeping things orderly…and apparently for no other purpose. James shoehorns into her plot a letter from Pontius Pilate to an underling about the arrangements to dispose of the body of Jesus, a letter which appears to be in the book solely so that her most intelligent priest can say something like, “For one who is sure of the presence of the living Christ, what difference do earthly bones make?” (Paul might have something to say about that.) When I was reading Death in Holy Orders I kept thinking about Susan Howatch’s Starbridge series–a highly enjoyable set of potboilers about the Church of England which tries, more or less unsuccessfully, to convince us that all of those weird supernatural things that happen in churches can be explained by way of Freud.

Third: I’ve always enjoyed those English-manor-house closed-circle mysteries where you have to figure out who, among a limited number of suspects, is most likely to have committed the crime. That’s essentially what Death in Holy Orders is, with the manor house transformed into a theological seminary on a remote spit of land. But this time I found myself growing a little impatient with the whole setup. I can’t even remember, now that I’ve finished it, who did the first murder, and I don’t really care. I think that James’s less conventional mysteries, like Innocent Blood with its themes of revenge and need-based love, or Original Sin, which I’ve always liked, maybe because of the whole murder-your-editor theme (no offense to any editors who may be reading this), are more engaging.

I’ll post about the next book later on; back to nonfiction for this week.

TimelinesProduction
My favorite editorial notation so farNegotiations with my editor(s)