As of last count, 189 names have gone into the hat for the ARCs. On Monday I’ll recruit my children to help me with a ceremonial drawing, and I’ll post the results.

That update on the dissertation is going to have to wait until next week, due to circumstances beyond my control. Instead, humor me while I muse for a moment….

Let me start out by saying I very much enjoy being called Queen of the Homeschooling Universe and PBS Guru-in-Training. (To quote P.D. James, “Tricky, that’s what writers are. You have to keep telling them how wonderful they are or they go to pieces.”)

NEVERTHELESS AND HOWEVER…I really do understand the true smallness of my place in the public eye. Nobody is ever going to count themselves lucky because they happened to sit next to me on an airplane. 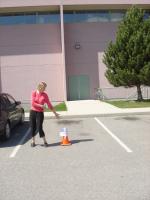 (Mary, my best friend from college, who drove to a conference with me this year and was greatly entertained that the organizers had given me a reserved parking spot.)

Still. Days like this, it strikes me just how weird it is to be even a mini-teeny-weeny-celebrity. I cruise around the Internet about once every six months, checking on new references to my work. When I first started writing, I did this all the time. Now I only do it about twice a year, because seeing all the nasty things people write about your books is NOT conducive to getting the next manuscript finished.

But I find that my biannual vanity-Google remains necessary, because every time I do it I find someone taking my name in vain…writing out long explanations about how they had conversations or email exchanges with me in which I said things which would (in reality) never pass my lips. (My favorite so far: Apparently I admitted that the Story of the World was full of deliberate historical errors, but that it didn’t matter because it was only written for children, after all.) When I find these, the office staff politely requests that they be removed.

This kind of experience unfortunately ruins the enjoyment of People and Us and Star Weekly forever. I bet none of those celebrities ever said any of the things attributed to them.

On this particular Internet surf, though, I had a different experience. First of all, I regret to say that my books are recommended for the education of white children by the Stormfront White Nationalist Community.

Good heavens. That’s the kind of thing that makes you want to say, “Thanks for your support, but could you write a scathing denunciation of all my works instead?” I’d ask them to take the posts down, but I don’t think I want to have a conversation with those people.

Two hundred references later, I felt slightly better when I found that the antiSemitic U.K. organization called Catholic Voice (please note that Catholic Voice has NOTHING to do with the actual Catholic church) does in fact suggest that all my books be avoided. “We advise home-schoolers to steer well clear of Susan Wise Bauer’s books,” warns the Catholic Voice, sonorously. “Whether or not this good lady is Jewish (as her name certainly suggests), she tends to disregard pivotal Christian teachings and to favour Jewish, masonic, and communist authors.”

Wonder if they’re talking about the Bible.

Anyway, my sincere and heartfelt condolences to those authors who meet with their favor. Speaking from experience: if you could get the Stormfront White Nationalists to cast you out among the dogs, you’d feel a lot better. 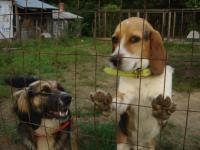