So many of you would like an ARC that I’m going to see whether I can winkle two more out of Norton and give away three copies instead of one. That improves the odds a little bit, right? On September 25, I’ll draw names and post the winners. If you’d like to add yourself to the drawing, just post a comment to the blog entry below this one.

Now that my husband is back, I have managed to finish off checking those first pass pages.

I found lots and lots of small errors, about half of which were mine (misspellings, words left out) and the other half of which were the typesetter’s (eliminated and transposed lines, weird line breaks, repeated words). Almost half of the time lines were set incorrectly. Instead of using the hard copies that I sent, which showed where each name and event should go, the typesetter apparently printed out another copy from the electronic file–which changed all the spacings.

Here are all the corrections, marked with yellow flags: 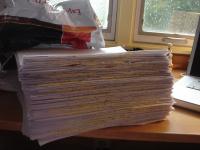 I added the acknowledgment and dedication pages, which always go in late, and shoved it in a box (I do realize these pictures are more interesting to me than to anyone else….): 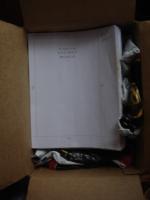 I regret to say that, while I was plowing through the first pass, my fall cold turned into pleurisy. (Doesn’t that sound like a Victorian ailment? Like gout.) So I had to go and get an anti-inflammatory shot yesterday, and now I’m languishing around the house in my pink bathrobe. To cap the week off, it’s pouring outside. So I summoned my second son and entrusted him with the box. Here he is, heading out to take it to the Peace Hill Press office so that they can UPS it back to Norton for me,

and here he is, triumphantly returning (with helpful older brother). 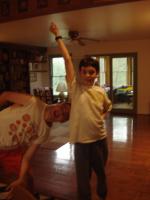 Thank goodness that’s done. By the time I was on page 800, I was choking on my own prose.

In closing: I’m happy to point out that the new books by Norton authors Michael Lewis and Ian Toll, both of whom I had dinner with at BookExpo in May, have gotten starred reviews from Publisher’s Weekly, which is a very high honor indeed.

Next week I should have some interesting news about the process of getting a dissertation published. So stay tuned.

The arrival of the ARCs, and a raffle offer…Production, Publicity
The weirdness of being a semipublic figureThe raving writer