I’m still in the eighth century. Struggling valiantly (and slowly) toward the ninth. Here’s my favorite story of the week.

Once upon a time, a king named Offa ruled in the English kingdom of Mercia. Offa, who reigned c. 757-796, had a (relatively) huge empire, big enough so that Charlemagne treated him as an honored colleague. (Not as an equal, but then Charlemagne didn’t treat anyone as an equal. Their friendship endured until Offa suggested that his son and heir marry one of Charlemagne’s daughters, at which point Charlemagne was highly offended and broke off contact. But that’s another story).

And here’s Offa (he was rich and powerful enough to mint his own coins, some of which have survived with his portrait on them). 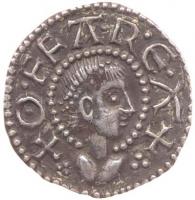 Late in Offa’s reign, one of his money-makers designed him a new coin. On one side, it says “Offa Rex.” And on the other, it says, “There is no God but Allah, and Muhammad is his prophet.”

How did this happen?

Well, the Muslim empire at this point was ruled by the Abbasids, a family of caliphs which controlled roughly this much land.

A few decades before Offa’s coin, the caliph managed to make a semi-peace with his enemies to the north, the Khazars, who controlled the land just west of the Caspian Sea. 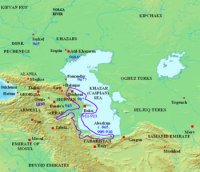 This meant that it suddenly became safer for Arab merchants to travel up north, through the Caspian Gates (that’s the pass just west of the Caspian Sea, where you can get through the mountains from the Middle East up into southeastern Europe–right around the city of Derbent, on the map above), up the Volga River.

The merchants took with them, of course, their coins, which had “There is no God but Allah and Muhammad is his prophet” written on them in Arabic.

One of these merchants, with one of these coins, got up far to the north–as far as the settlements of Scandinavian traders, who had crossed the Baltic sea and built little trading posts along the coast and southward along the rivers that reach down into Europe. (On the map below, those settlements lay mostly in the purple and dark orange areas.)

One of these traders took the Arab merchant’s coin. And then, some time later, he paid the coin to a British merchant, who took it home. Here it fell into the hands of Offa’s silversmith, who liked the pretty tracings on the back and copied them onto the reverse of the next coin he designed. 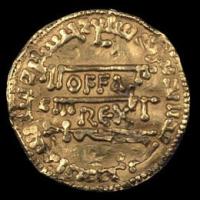 (now in the British Museum)

He had, of course, no idea what the pretty tracings meant. We know this because, while the words “Offa Rex” are right side up, the Arabic lettering is upside down.

Unless you do world history, it never occurs to you that the king of Mercia and the caliph of the Abbasid even existed in the same universe. But their coins reveal that they most certainly did.