Now that I’m well back into the Middle Ages, hammering out a final scheme for the second book in the series, I’m increasingly aware of how little time I have left. That spring deadline is looming large and near.

So I’m always trying to find a few extra hours to work–especially since two of my working afternoons fall on Friday and Saturday, periods which are often cut short by social engagements of various kinds. The most tempting solution is to get up early and/or stay up late to work, something which I’ve always ben willing to do. At the best of times I get seven hours of sleep a night. Six hours is typical. Four to five hours is often the case when I’m working on a project full-time.

Last week my doctor remarked to me that losing sleep causes you to gain weight; your body interprets lack of rest as stress, and tries to make up for it by demanding more calories. And this morning, New York Magazine informed me that THIS is the best thing I can do for my history-stressed brain: 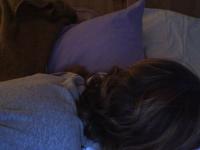 The Mag reports that half of all adolescents get LESS than seven hours of sleep per night–and that this can cause them to perform two to three grades below level.

Half of all adolescents get less than seven hours of sleep on weeknights. By the time they are seniors in high school, according to studies by the University of Kentucky, they average only slightly more than 6.5 hours of sleep a night…..It has been documented in a handful of major studies that children, from elementary school through high school, get about an hour less sleep each night than they did 30 years ago. While parents obsess over babiesâ€™ sleep, this concern falls off the priority list after preschool. Even kindergartners get 30 minutes less a night than they used to….

The surprise is how much sleep affects academic performance and emotional stability, as well as phenomena that we assumed to be entirely unrelated, such as the international obesity epidemic and the rise of Attention Deficit Hyperactivity Disorder….

Dr. Avi Sadeh of Tel Aviv University is one of the authorities in the field. A couple of years ago, Sadeh sent 77 fourth-graders and sixth-graders home with randomly drawn instructions to either go to bed earlier or stay up later for three nights….The first group managed to get 30 minutes more sleep per night. The latter got 31 minutes less sleep.

After the third nightâ€™s sleep, a researcher went to the school in the morning to test the childrenâ€™s neurobiological functioning….The performance gap caused by an hourâ€™s difference in sleep was bigger than the normal gap between a fourth-grader and a sixth-grader. Which is another way of saying that a slightly sleepy sixth-grader will perform in class like a mere fourth-grader. â€œA loss of one hour of sleep is equivalent to [the loss of] two years of cognitive maturation and development,â€ Sadeh explains.

Sadehâ€™s findings are consistent with other researchersâ€™ work, all of which points to the large academic consequences of small sleep differences….

Wow. (The rest of the article, well worth reading, is here.)

As a home school mom, I have absolutely no impetus to get my children up early; they sleep until 8 AM unless they wake up before, and at our house no one under twenty keeps the light on past 10 PM. In fact, one reason I’ll probably never put my kids back into secondary school is that I’d have to start rousting them out of bed at a painful and ungodly hour to get them off to class.

But I’m usually pretty cavalier about depriving myself of sleep. It’s counterintuitive to think: I’ll write more if I stay awake less. This week I’m going to try to work against my instincts, though, and sleep a little more.