Today’s post has nothing to do with the History of the Ancient World, publishing, travelling, or education. Today’s post is about the Sunflower House, which has become too cool to ignore.

Late in the spring, my mother (source of all creative kid-entertainment in this house, my two standbyes for boredom being “Read another book” and “Eat another cookie”) helped Daniel and Emily plant sunflower seeds in a square in the garden, with morning-glory seeds between them. When the sunflowers were about three feet high, we laid newspaper over the ground inside the square. I helped the kids gather pine needles down near the side woods, 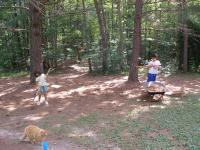 and spread the needles on top of the newspaper to make a floor. 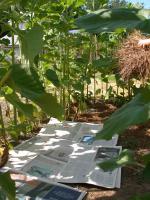 Mom strung twine between the sunflower stalks for the morning-glories to climb up on, and ran it from side to side overhead so that the vines could twine along it and form a roof. 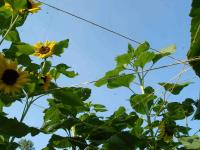 Now, the sunflowers are high enough to see over the grape arbor, and the house is big enough for me to walk into. Here’s the floor, 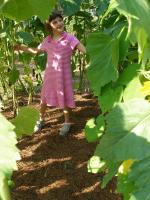 Emily peering out the front door, 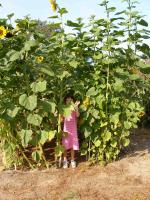 and Emily peeking out the side window. 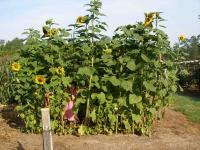 The house reminds me of one of my favorite books, The Three Little Wolves and the Big Bad Pig, in which the Pig (who is not called big and bad for nothing) destroys all the houses the Three Little Wolves build, until they make one from flowers and apple blossoms. (This would be the British equivalent of sunflowers and morning-glories. Also the British can play in their Flower Houses longer than we can play in ours, because it isn’t 98 degrees with 80% humidity in England in July.)

Addendum: I don’t know where Mom got the Sunflower House idea, but you can find a design in Sharon Lovejoy’s Sunflower Houses book. ( Thanks for posting below, Ms. Lovejoy. I actually have this book on my shelf somewhere….)