We’re back from the beach–Cape Hatteras (we barely outran the tropical storm), where we mostly ate cookies and swam, although we had the occasional outing to Places of Historical Significance. Where the boys mostly learned about… 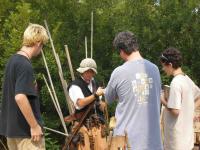 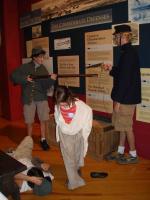 …weapons. And so did the Warrior Princess. 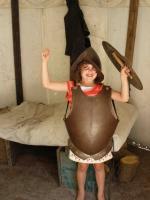 I’ve occasionally had parents complain that the Story of the World is too battle-oriented. That’s probably due to the fact that I wrote it to educate my own testosterone-heavy band. And the Warrior Princess.

Anyway, I find myself at the mid-point of my sabbatical, and several of my friends have asked me if I’m enjoying it.

Hmm. Well, the report is mixed. On the negative side, I’m discovering that the time I carve out for writing each week does not remain unfilled if I’m not writing. Writing time is like a balloon. The act of writing (and for me, the existence of contracts and the legal obligation to meet deadlines) is the air that fills it. Without the air, the balloon collapses inward. So apart from the beach vacation, I can’t say that I feel as if I’ve rested. I feel as if I’ve done a lot of stuff which needed to be done, and HASN’T been done because I’ve been writing. Nothing wrong with this, of course, but I haven’t spent as much time sitting, and thinking, and reading, as I’d hoped. My life is more orderly, but my mind is no less cluttered.

On the positive side, I have enjoyed my evenings much more. I realize I’ve gotten into a habit of putting all the kids to bed and then thinking, “Can I rest now, or should I work some more?” Being the type-A Protestant that I am, the answer is usually “Work more.” I haven’t been giving myself that option–and it’s refreshing.

Even more positive–I am REALLY looking forward to getting back to the History of the Middle Ages. I’m restraining myself from just opening up the file and jotting down a few ideas, but I’ve been very tempted. So when October 1 rolls around, I’ll be glad to sit down to the task–and since I couldn’t stand the thought of it back at the beginning of August, the sabbatical is obviously doing the trick.