Itâ€™s the Tuesday after Labor Day, so a long-awaited email has just pinged its way into my mailbox. Thatâ€™s right: itâ€™s Royalty Day.

This is why writers have cash-flow problems: This royalty money, which comes in every six months, comes from copies of my books sold as long ago as A WHOLE YEAR.

Hereâ€™s how it works. In September of 2006, a copy of The Well-Educated Mind sits in a bookstore in Williamsburg. The cover price is $27.95, but the bookstore has discounted it 10%. An enlightened and discerning reader wanders by, picks it up, leafs through it, and then takes it up to the counter. She buys it for $25.15, takes it home, and stays up all night, mesmerized by the chapter on the History of the Novel.

Publishers reckon up their royalties every six months, so in March of 2007, the accountants at Norton figure up how many copies of The Well-Educated Mind have been sold to bookstores between September 2006 and February 2007. (Another peculiarity of publishing: the year begins in September, when the big fall books come out, and ends in August.)

But the accountants have no way of knowing whether those copies have actually gone home with readers who will love them. No, all THEY can see is that the copies have shipped to bookstores, where they may still be on shelves, or in boxes in the back room. And bookstores have the right to return those unsold copies at any point. So the accountants will HOLD ONTO my royalties for an additional six months. Between March 2007 and August 2007, whenever copies of The Well-Educated Mind get shipped from bookstores back to the Norton warehouse, the $3.50 for each of those copies is deducted from my royalty total.

By the end of August 2007, the accountants figure that any books shipped between September 2006 and February 2007 have already either sold or been returned, so they release the royalties for those books (which are now reckoned not just shipped, but sold). At that point, the publisher is legally obliged to pay over the money by the end of the month.

Which in practice means–you got it–the royalty check is issued on the very last day of the month. Hey, that money is earning interest. No point in handing it over too quickly. 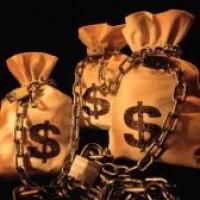 So a check arrives at my agentâ€™s office on the first business day in September. He emails me to let me know the total, deposits the check in his account, deducts his agency commission, and then writes a check to me.

Generally this takes another week or so. Sometimes longer. Imagine my surprise, when I first dealt with a big publisher, to see that the check from the publisher was drawn on a bank in Wisconsin. Yes, thatâ€™s right. The publisher paid all royalties out of a bank account in the midwest because it took the royalty checks another two or three days to clear that way–another two or three days that the royalty money was earning interest for the publisher.

So when do I get the $3.50 which has been sitting around unspent since September 2006? Sometime in the second week of September, 2007.

The royalty statements which have just arrived make no mention of the History of the Ancient World, because the total that my agent informed me of today–that’s September 4, 2007–is for books sold between September 2006 and February 2007 . The History of the Ancient World had a pub date of March 2007–so it wonâ€™t even show up on my royalty reports until I hear again from my agent about royalties in March 2008.

Hey, no matter what I may say about the spiritual toxicity of publishing, writing is great for your maturity It’s all about delayed gratification.