After two and a half years of wrestling with the ancient world, I finally finished the manuscript right before Christmas. I pulled the traditional thirty-hours-straight to get it in the mail. I always end up doing this, even when I’ve had a deadline for two or more years, and it makes me sympathize with Gandalf in Peter Jackson’s Two Towers: “Three hundred lives of men have I walked this earth, and now I have no time!” After nine books I’ve decided that this is just the inevitable wrap-up to any long project.

And long is the word. I’ve been negotiating with my editor at Norton, the brilliant and capable Starling Lawrence (hey, he bought my proposal, didn’t he?) over the word count until I’ve begun to feel like Abraham bargaining with God over the number of righteous men in Sodom.

Me to Starling Lawrence, about a year later, “I might go a bit over.”

Just before submission: “I’m at 250,000 words and can’t find any flab to cut.” (Longer pause from Norton this time, until Star emails me back and says that he’s consulted his colleagues, and 250K doesn’t sound totally unreasonable, given that this is the history of the whole ancient WORLD.)

In fact I think it reads very well–the individual chapters are relatively short, and they hang together in a tight narrative–but I do think there’s a limit 1) to what Norton will shell out in paper costs, an d 2) what readers will actually pick up and begin reading. But I’ve put it into the mail, all twelve pounds of it, and am now waiting to hear the verdict. 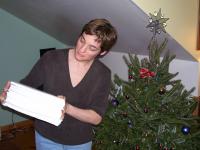 The madwoman in the atticThe raving writer