There’s nothing going on with the History of the Ancient World from my end. Zip. It’s off being printed (I think), and I’m just waiting to get a glimpse of it. Or get another review. Or something.

In the meantime, we’ve been having a warm January with lots of rain, followed by sharp frost and cold: this means that the forsythia has 1) blossomed and 2) frozen to death. 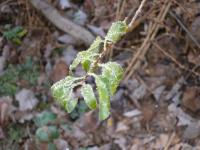 It also means that we’re having road problems. All that freezing and expanding is death on roads, and we live down a LONG one, with no other access into the farm.

The culvert closest to the county road collapsed last week. We had to call in the labor corps–my cousins (this is when it helps to be related to half the county). 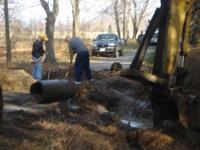 (Those are my first cousins, once removed, digging along the line of the old culvert.)

Once the ditches were redug on either side, we moved into the important stand-around-and-talk-about-the-machinery phase, 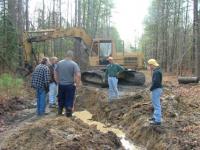 after which the culvert went in 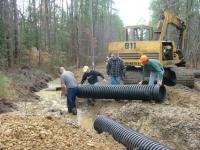 and was covered by gravel. Now we’ve got a huge gravel speed-bump down at the end of the road, which UPS and Fed-Ex have both bottomed out on. (So did I, in the family van. I forgot it was there and all the kids’ heads hit the van ceiling.)

In another sign of the season, the last day of hunting season has come and gone. Once again I can go for my long run around the back of the fields without worrying about getting shot. And once again the dogs have found lots of goodies from the woods, where the hunters tend to clean the deer and leave the…er…extra bits. Seriously, our yard looks like there’s been an explosion in a deer factory. I tripped on this one on my way down to my office this morning. 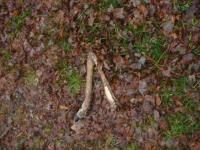 And speaking of my office…yes, I am plugging along on the medieval history manuscript, thanks to the color-coded schedule (which is REALLY helping me work when I’m supposed to be working, as opposed to emailing, or shopping online, or waching The Office episodes on iTunes…). This week I’ve finished a very rough draft of Part One, and I’m going back through making a detailed outline of each chapter on oversized paper. 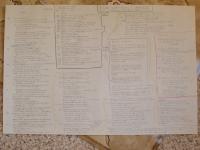 I’ve decided not to do my next draft until I’ve finished a first draft of the entire book–in January 2008. By which point I’ll have forgotten what I was thinking, in Part One, unless I make very careful outlines of all my notes. This is a lot of work…but I’m hoping it will help me focus in, during that second draft, on which parts actually NEED further development and which can be cut. With the last book, I developed the WHOLE THING and THEN cut it. As a result, I wrote 800,000 words in order to produce a 250,000 word manuscript.