Sundays are work days for us, so Mondays are our days off. It’s sprinkling a little this morning, but not too hard; the windows are open and the birds are singing. The neighbor’s cows are mooing (in fact they sound like they’re in the back yard–I’m going to go check as soon as I post). 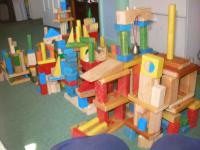 Christopher discovered that Emily fits inside my giant library bag. 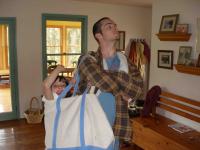 Everyone is enjoying nature on this beautiful spring morning. 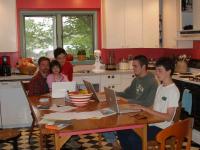 Well, OK, not quite. But I’m going to chase them all outside in a minute to do their chores.

It’s the last week of April, which means that I start travelling again at the end of the week. Off to New York for a conference, and then into Manhattan for a couple of days to have lunch with my agent and do a bit of research at the NYPL.

I scheduled my summer speaking engagements back in the days when I thought that I might actually have the History of the Medieval World finished by the deadline of May 1. Now my deadline is the end of August, and to meet THAT I’m going to have to work about three times as hard as I’ve ever worked before. (Which is scary.) While still travelling. And without destroying the rest of my life: I refuse to give up home schooling, or cooking fancy dinners for fun, or horseback riding, or working on the farm. So I’ve got to manage to be more efficient within my current working hours.

I reached this conclusion yesterday, after working out a detailed plan for finishing the book. Then I launched my new rigorous plan by sleeping right through my alarm this morning (I was going to do my 4 AM wakeup call…). And I was going to get to work on the Plague of Justinian, too. Here’s where I finished up work on Saturday…

*
The fighting had not gone well for the Byzantine army, but a blacker enemy hovered. In 542, just as Khosru was crossing over the Euphrates for yet another assault on the Byzantine frontier, a ship docked at the Golden Horn. It brought much-needed grain from the mouth of the Nile; the cold dark summers of the previous years had already reduced food supplies, and the population of the eastern Empire was already hungrier and weaker than normal. But not long after the ship threw down its anchor, a sickness began to spread along the waterfront. It was an illness known to the ancients, but new to the people of Constantinople: sudden fever, swellings in the groin and armpit, black pustules and bloody vomit, delirium and coma.
Physicians, dissecting the bodies of the dead in an effort to find the cause, found strange abscesses filled with pus and dead tissue at the center of the swellings. They were at a loss: nothing seemed to stop the spread of the disease. At first, the deaths from the illness were no worse than from any other epidemic making its way through the crowded suburbs of Constantinople. But within days the mortalities had doubled and then doubled again.
This was no mere epidemic. It had become a catastrophe without parallel: a pestilence, writes Procopius, â€œby which the whole human race came near to being annihilated.â€
*

Cool, huh? I love disasters. Well, I’ll get back to it tomorrow. Assuming I can roll out of bed when the alarm goes off.