I don’t usually do movie reviews, but ever since I mentioned that my husband and I were headed off to see Robin Hood earlier in the week, people have been asking me what I thought. I guess that’s because I tell stories about history for a living. And since I’m writing about this very time and place in my ongoing world history series (Volume 3 begins in 1100, just after the First Crusade; as the movie begins, Richard the Lionhearted has just finished the Third Crusade, which took place 1189-1192) I’ve decided to write a review.

There may possibly be a spoiler or two in the following, so if you’re a stickler for surprises, you might not want to read on. But really, it’s Robin Hood; how many plot twists can you expect? (Rhetorical question. There weren’t really any.) 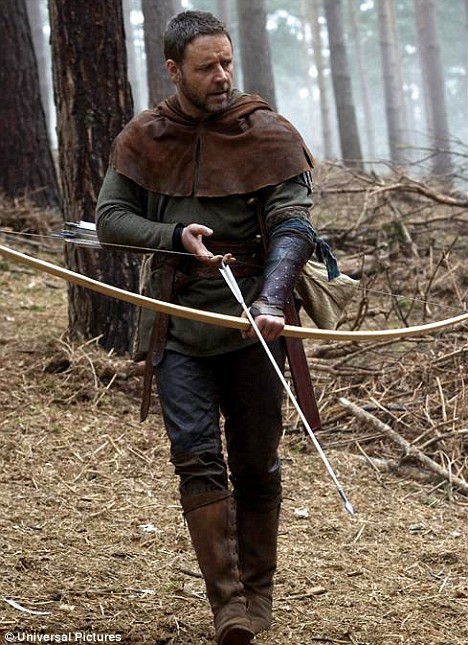 Directed by Ridley Scott, starring Russell Crowe and Cate Blanchett
Grade: Er…Can we switch over to a pass/fail grading system for this one? Because I can’t actually give it an A, but (surprise!) I’d like to at least pass it.

Ridley Scott seems to have done a lot of borrowing from other filmmakers: the arrow flights from Kenneth Branagh’s Henry V, the beach landing from Saving Private Ryan, the swooping-down-between-the-mountains camera shots from The Two Towers. As a friend of mine remarked, maybe he needs to stop going to the movies.

More central: Robin Hood isn’t anything close to Gladiator. That movie was very closely focused on the personal crises of two or three characters; Maximus wants his family back, the emperor wants power (and his sister), his sister wants to protect her son. The political maneuverings of the Senate and the jousting for power between emperor and the people’s representatives was secondary subplot. Robin Hood reverses this plot-subplot relationship. In the foreground, the English try to get King John to recognize their rights; the personal story between Robin Hood and Marion of Locksley is the subplot. 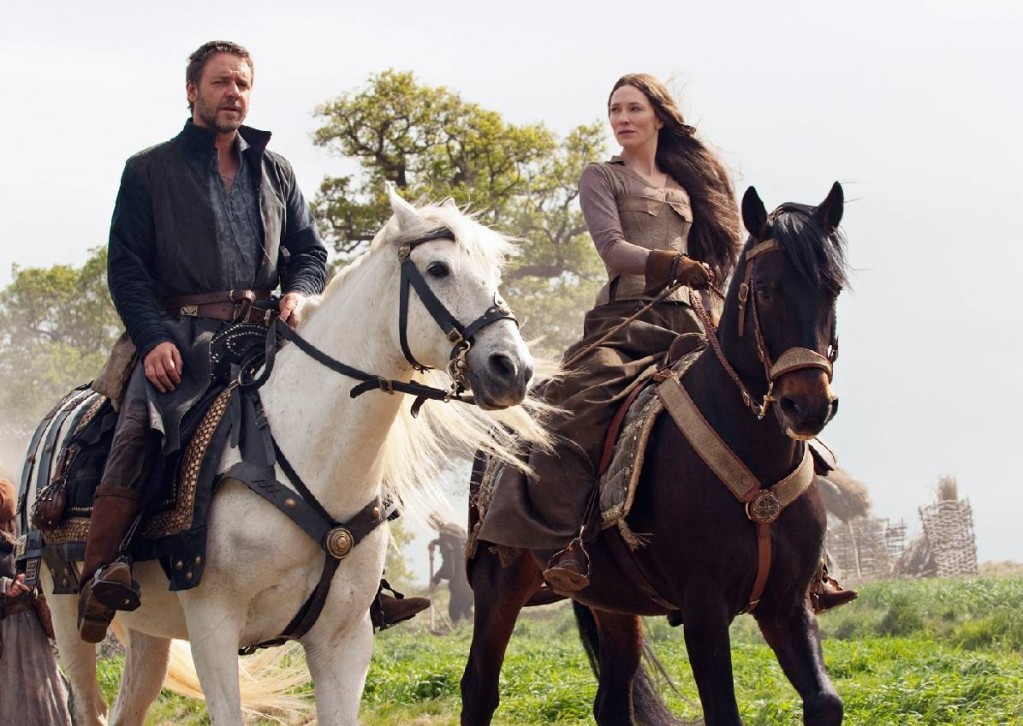 The movie’s the poorer for it. Unfortunately for the scriptwriters, the English struggle against absolute royal power took place over a number of years; there was no one charismatic leader that whipped the common folk up into indignation against their rulers; and the rights the English were demanding didn’t actually have much to do with the common folk anyway. The Magna Charta did improve their lot, but the driving force behind its composition was the indignation of the English barons (those are the rich folk) over royal trespasses into theirrights. Aristocrats trying to bring a king to heel: not nearly as heart-warming a story.

In the scriptwriters’ hands, Robin Hood becomes the charismatic leader; the common folk get way more involved in forcing John to acknowledge their rights; and the rights themselves get transformed into something that sounds a lot like the U.N. charter. In fact, Robin Hood ends up delivering a ten-minute speech explaining how England should become a liberal western democracy.

I will not lie. I was rolling my eyes during this part. A lot. It reminded me of the scene from another Cate Blanchett move, Elizabeth, where the young heartbroken queen gazes up at a statue of Mary and decides that she’ll identify herself with the Blessed Virgin, so paints her face white and turns into the Virgin Queen. Weeelll…by the end of her life Elizabeth had definitely made the connection, but it was a gradual and lifelong process. She didn’t just make up her mind on the spot. 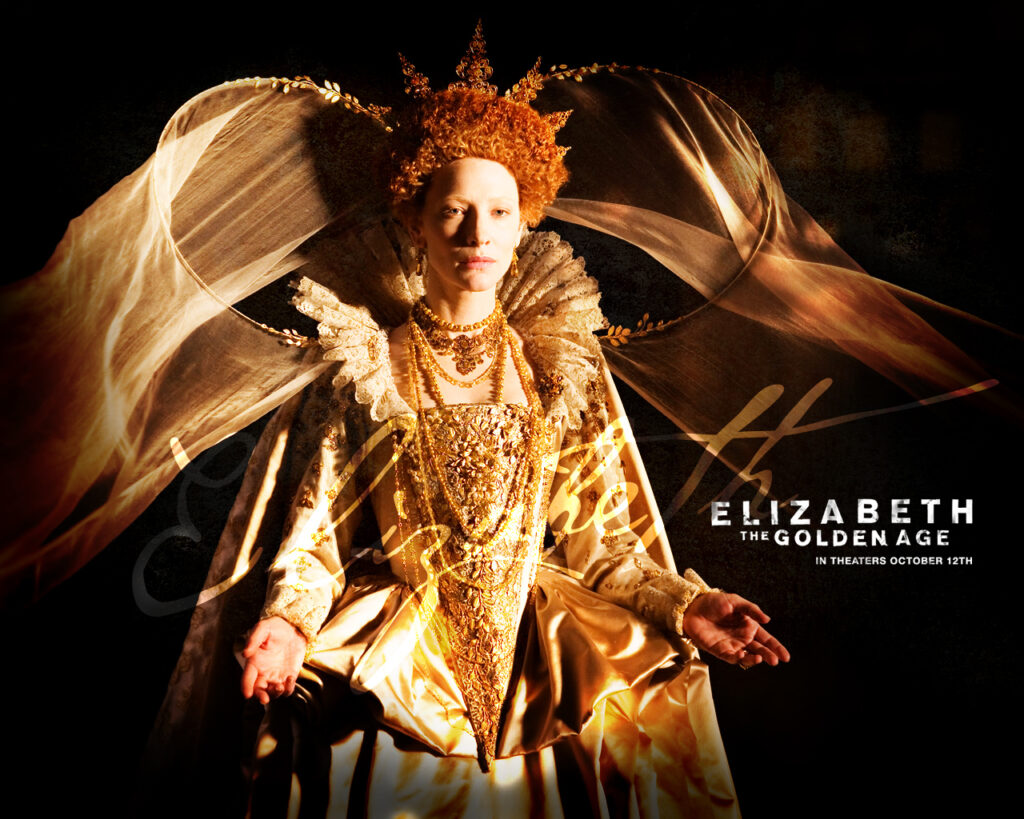 Gradual transformations don’t play well on the big screen, so they get turned into moments instead.

And then of course there are the smaller historical accuracies. Richard didn’t fall in battle; he was wandering around the castle without his chain mail on. French soldiers did not help tax collectors sack towns in order to get more tax money for King John. And Philip of France would never have sailed up to Dover with an attack fleet and then remarked to his helmsman, “Nah, it’s not going to work this time. Let’s just go home.”

What were the positives? Well, Russell Crowe makes a mighty fine archer, and I could be entertained watching Cate Blanchett breathe. But what I appreciated about the movie (and the reason I’ll give it a pass) were the number of moments that gave me a vivid imaginative glimpse at what life in the Middle Ages was actually like. I write about the Middle Ages every day, and I constantly forget just how different the pattern of daily existence is.

So you want to travel from the coast of England to a town in the south? It’s going to take a long time. Your son goes off to the Crusades? You won’t know for ten years whether he’s dead or alive. You want to find out if your husband survived his journey? You’ll have absolutely no inkling until his ship docks and he walks down the ramp–or else someone else does, carrying his sword. You’re a major landowner? That means you’ll spend your days out in the fields wrestling with a primitive plow and hoping to raise enough grain to survive. And, most powerfully in this film: You’re a woman in the Middle Ages? Life is not good.

For those moments, I give the movie a passing grade. Although if I had to do it again, I might rent it instead of shelling out for a ticket.