Why I haven’t blogged for two weeks…let’s see…

1. We got Emily a pony for her birthday because the horses have turned out to be JUST TOO BIG for her to learn on. 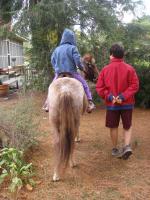 So we’ve spent a lot of time working with the pony. Also Max, my Belgian draft horse, did not adjust well to the pony. He wanted to EAT it. Simultaneously we were having the fence replaced, so keeping them apart was an ongoing labor. Now, at last, they seem to have made their peace.

(Everyone eating hay, with Ben in the foreground.)

2. The election sent the message boards at the Well-Trained Mind website into an amazing tizzy, meaning that the moderators needed HELP. What a circus.

My personal summary of the styles involved: Troublemakers who are Republicans post nasty offensive messages on the board. Troublemakers who are Democrats send nasty offensive messages to the moderators. I finally got on the boards myself and banned all political conversations until the election was over. We’ve tried to lift the restrictions since Tuesday, but whenever we do, chaos sweeps over us. Unhappy Republicans post apocalyptic messages about how their children’s future has been ruined and they’re going to have to move to Canada (I’m unsure how this is better, but never mind), while offended Democrats post in return that they’re SHOCKED and HORRIFIED by the incivility on the message boards.

If you think I’m going to reveal my own political leanings here, you’re nuts.

Word to the wise on both ends of the spectrum: The world didn’t end (HELLO), and it’s easy to be civil and gracious when your candidate won.

ADDENDUM to word to the wise on both ends of the spectrum, after reading today’s batch of emails: Do you realise that you ALL think you’re outnumbered on the boards and made to feel unwelcome because the boards are so clearly dominated by the other faction? Think about that one for a little while…

3. Had to do significant work on the third level of the Writing With Ease workbook series to keep it on track for publication.

4. My sister-in-law/business partner and I had to figure out how to deal with a slew of irate customers who wanted to use First Language Lessons 4 this fall. This book has been a NIGHTMARE. I ended up doing a huge amount of unexpected work on the manuscript myself, due to circumstances beyond our control, and it’s way late. They’re right to be irate, but we’ve done everything we can…

5. I ended up writing several different pieces to follow up on the publication of the Art of the Public Grovel. One was for the Richmond Times Dispatch, which asked me to write about home education after this piece ran. Two more were for the History News Network and the Wall Street Journal…I’ll let you know when the WSJ piece runs.

7. The first-pass galleys for the third edition of The Well-Trained Mind appeared, courtesy of Norton. 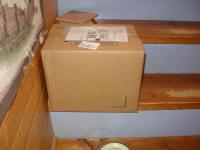 Yeah, the box looks unopened. It is. It’s due back in a couple of weeks but I haven’t actually had time to open it up yet.

8. There are over a hundred unanswered emails in my email box. So far I’m coping by ignoring them, but this is a strategy bound to come back and smack me in the head at some point.

9. Oh, yes, history. In the middle of all that I wrote a pretty good chapter about the rise of the Fujiwara in tenth-century Japan. Must…write…faster…

Indignation at the RSAPublicity, The raving writer
The Well-Trained Mind, third edition, galleysProduction