I came back from the American Library Association conference with a bad cold, so it’s taken me this long to post an update.

Norton scheduled me to do a signing at their booth at 11:30 AM on Saturday, the first full day of the conference. Signings are rough. If no one shows up, you sit and try to decide whether to smile hopefully at passers-by, or whether to gaze thoughtfully into the distance as you compose your next book in your head (since the one you’re signing obviously isn’t of interest to anyone). Neither of these is particularly dignified.

So I was frankly dreading this one. I went up Friday evening on the train and bought myself a good dinner at a restaurant two blocks from the White House, and the next morning I got up and went for about a seven-mile run all around the Mall and its landmarks. Then I dressed and headed over to the convention center with butterflies in my stomach.

Even before 11:30, though, people started coming by to get books signed. 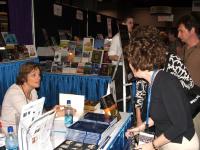 Golda, Norton’s marvellous library coordinator, took these photos and sent them to me so that I could document the event. There were PEOPLE there! There was actually a little LINE! 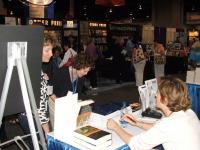 Charlie, who came up for the day to talk up Peace Hill Press books with librarians, handed out biographies (we’re trying to get a little more attention for our “Who in the World” biography series for elementary grades) to people trapped in line. 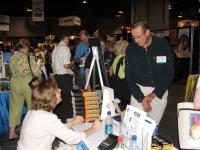 We actually ran out of books before the hour was over.

Now that I’ve exulted over the Little Line that I had in front of my table, I should mention that Norton was, in fact, giving the books away. Norton doesn’t sell books in D.C. at trade fairs because of tax regulations, so signings at ALA (and at last year’s BookExpo, which was in D.C. as well) are a chance to score free books. However, I’m going to pretend that all of those people would have BOUGHT a book anyway.

I also got news from my editor this week that the History of the Ancient World has sold to the largest publisher in Russia. So when the translations are finished, it will be available in Korean, Spanish, Bulgarian, and Russian.

Maybe it’ll actually get REVIEWED in one of those languages. Yes, I’m still annoyed by the enormous silence that greeted the book’s publication. It got three industry reviews (Publishers Weekly, Library Journal, and Booklist), two listings in scholarly papers (the Chronicle and Booknews), one snarky pan (Bloomberg), and one two-sentence mention in a newspaper in Oklahoma. That’s IT. I don’t think I’ve had a book this thoroughly ignored since my first novel came out (the one that sold three thousand copies). The History of the Ancient World seems to be selling along just fine, and it’s done well with libraries. But why the news blackout? I am puzzled. (I’ve also discovered, via the grapevine–not officially, that is–that my publicist at Norton is leaving. I’m not sure what this means for the book.)

This sort of thing ought to be less disturbing than it is, but I’m having a hard time plowing on with the History of the Medieval World. However…this is probably because I’m also in need of a thinking break. At the moment, then, I’ve given the history a rest so that I can finish getting my study of public confession into publishable shape. With any luck this will be done in a couple of weeks. After that…still trying to cope with the post-dissertation brain-cell loss. I’ll keep you posted.

One last note: I’ll be trying out the “webinar” format on August 3rd, taking part in an online seminar. I’ll be talking about how to teach writing, so if you’d like to visit,go by the site and register.