So here it is, the first day of February. On my calendar I have a large red bar marking off the next three months. It says: Feb. 1 through May 1. History of the Medieval World. No Other Commitments. I’ve got fourteen weeks until the deadline for this book, and for the last three months before a deadline, I clear the decks and get ready to run down the home stretch. (Yeah, mixed metaphor, whatever.)

At this point, I figure there’s absolutely no way I’m going to finish the book by the deadline. I try to comfort myself by remembering that I always think this, three months before the deadline. Sometimes it’s even true.

The book is in first draft. I’ve got two drafts to go: the turn-this-mess-into-decent-prose second draft, and the polish-edit-cut third and final draft. That last process tends to happen over two intense final weeks. So I’ll be second drafting for the next eleven or twelve weeks. Prepare yourself for a whole slew of posts that say, “Today, I worked on the second draft.”

The challenge I have at the moment is that I’m not properly prepared for the second-draft push. It’s actually a physical process. When I’m second-drafting, I’m pushing very hard for an extended time…and when you’re pushing yourself in one area, you tend to compensate by indulging yourself in another.

In other words, when I second-draft, I bake, I eat and I don’t exercise. 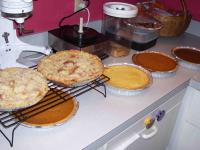 I read about one writer who says that she always aims to go into her big writing push on any book “slightly underweight.” Er…yeah. I’m nearly forty, I’ve got four children, and I just finished up the Christmas holidays. I’m not particularly OVERweight, but that Christmas five pounds is still mostly with me. However, I’m not sure that dieting, running extra miles, and second-drafting are going to go together.

Loud noises from downstairs…Coping with the farm
Maybe I should buy some salad.The raving writer