I had a great birthday last week (thanks to everyone who sent cards), and then took Christopher to New York for his fifteenth birthday trip; a business-free trip, apart from a friendly dinner with my editor and his wonderful wife, who are so hospitable that you’d think they were Southerners.

So Christopher and I went to Central Park, where I admired the flowers, 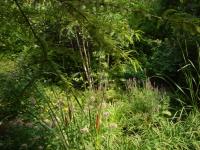 and we went around the Central Park zoo, where both of us admired the ENORMOUS polar bear who was hanging out in a corner of her pool, keeping cool. 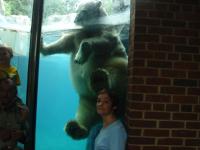 And then we did all the tourist stuff that I don’t usually have a chance for, like the observation deck on the Empire State Building,

where the lines were TWO HOURS LONG (never go do tourist stuff in New York City in August, not if you can possibly help it). However, I discovered that if you wave your credit card at the ticket agent you can buy an Express Ticket (for an extra $40 per person) which lets you go straight to the front of that two-hour-long line and ride directly to the top with no waiting. So I did. Which made the experience much more delightful, but did not make us popular with all the non-Express-Ticket-holding tourists in the two-hour line.

And then we went on a double-decker bus tour, past all the iconic sites of New York, like the Brooklyn Bridge 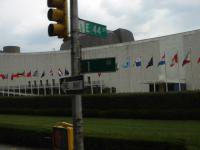 I was reminded of a passage in A. S. Byatt’s wonderful novel Babel Tower, where a publisher’s reader, faced with yet another novel about student life in Cambridge, reflects that the Cambridge landmarks have been described so often that they have a sort of mythic life of their own, infusing otherwise pale and cliched scenes with life and movement borrowed from hundreds of other scenes set in those very same places. Byatt says it much better, but when I went to find the passage I discovered that my copy has lost its back half, thanks to too many readings in the bathtub. I’ll have to get another one.

That same day, British authorities arrested suspected terrorists in the U.K., and the airlines announced that we had to ditch our bottled water and lip gloss. Which is OK with me, actually; annoying, but I’m always glad that everyone ELSE on the plane has had to surrender THEIR potentially troublesome items. It did make for an awfully long wait at the airport, though. 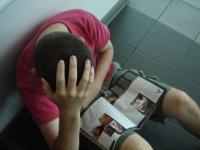 (Christopher at La Guardia, where I have spent more than one night on the carpet, unfortunately.)

So we’re back safe, and this week I start on the History of the Medieval World. Will report shortly on how that’s going.

What comes around, goes aroundThe raving writer
An Ominous AddendumProduction