My fortieth birthday was delightful. I had breakfast in bed and presents and a lovely birthday dinner at home on Friday, and another dinner at the Blue Talon on Saturday. It was a wonderful celebration.

So we got home and went to bed. At 2 AM on Sunday, Emily started throwing up. At 4 AM, Ben joined. By 5 AM, Pete was throwing up too. So far, I have escaped the stomach bug, whatever it is. Daniel helped by explaining exactly which microbe was infesting everyone.

Then on Tuesday morning, my mother smelled something unpleasant underneath the laundry room floor. That, of course, is where all the drain pipes run. It’s an old house, so we have a plywood square cut out of the floor that we can lift up to get underneath the house (one of the advantages to never having gotten around to putting linoleum over the subflooring). 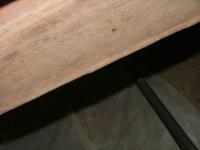 We sent Dan spelunking, and he reported that there was water all over the ground under the house. Clearly, something was leaking. Someone needed to go down and investigate further. Someone small enough to get under the house without getting stuck, and old enough to follow directions shouted from above by the Master Plumber. 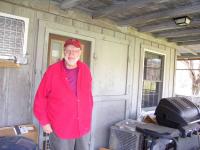 (This is the Master Plumber. He does not like to wriggle around under the house on his stomach.)

So the small, old person going under the house would be…me. 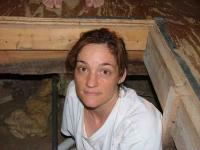 (I am very secure, now that I’m forty, which is why you get to see the picture.)

Turns out that some plumber, at some point in the past, capped a waste pipe with A PIECE OF CARDBOARD AND DUCT TAPE. It lasted quite a while, apparently, but despite its ingenious construction, it gave way and now the washing machine is spurting grey water under the house. 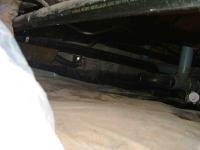 (The pipes under the floor. Can I just say that the flash on the camera makes it look very bright and cheery under there? IT ISN’T.)

So I climbed under. Dan and Em came down to help. 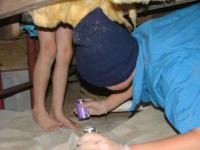 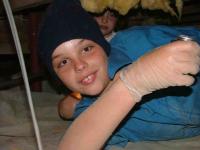 Dan carried stuff and said, at intervals, “Is that a black widow? I see something moving over there. What’s that hanging down from the floor? Is it squirming? That’s a REALLY BIG WEB.”

Meanwhile I lay on my stomach (in the water), 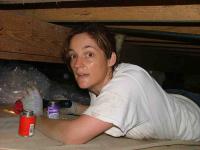 ripped off the duct tape, cleaned the outside of the pipe, and cemented a proper cap onto it. 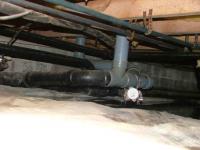 Now the foundations are drying out. It still smells a little ripe down there, though.

Stay posted for actual BOOK RELATED updates. I was writing about the Varangian Guard when the plumbing happened, but plumbing gets priority.