We do school year-round with the kids, because that gives us plenty of flexibility to take days off whenever we’ve all HAD it (and because they get VERY bored with a three-month summer break). This tends to make the years ooze into each other, so that I have to stop and think to figure out what “grade” each child is in.

I do usually stop in July, though, and do my standardized testing and figure out what I need to order for the following year. This July, the figuring is particularly interesting, because I’m trying to tailor my oldest son’s curriculum to educate him as a writer.

In other words, I’m trying to practice what I preach. The classical pattern encourages students to specialize as they enter high school, rather than waiting until the junior year of college; in my opinion, we keep American students generalists for much, much too long. The requirement that they take more and more different kinds of classes, rather than being allowed to specialize in what they love, gives them broad but very shallow knowledge. It deprives them of the chance to develop a passion for some particular subject. It makes them planless and listless. (I’ve taught college freshmen for the past ten years; I know of what I speak.)

So rather than insist that Christopher stick to some standard liberal-arts curriculum, I’m allowing him to specialize. This is a child who has already written three novels and has a natural gift for language. He reads constantly. When he has a free afternoon, he runs away and writes. (By the way, I don’t take all the credit for this. I did work on giving him a good solid foundation, but he just came this way. My second son will be a WHOLE DIFFERENT MATTER. But more on this later.) 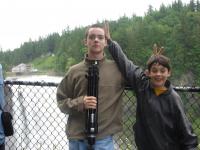 Last year, his ninth-grade year, Christopher took an array of correspondence courses (art, psychology, shop…) that I allowed him to pick out of a catalog. He wanted to experiment a bit. This year, he wants to concentrate on his writing.

So here’s the plan I’m laying out for him.

LANGUAGES
(T.S. Eliot once said that every writer ought to learn another language well enough to read its literature, in order to see through different cultural eyes.)
Latin (Jenney, because I used it and I can tutor him), three times a week
Japanese (he’s taking this with a tutor from William & Mary), three times a week

CONTENT
History (Ancient world, using my unpublished manuscript; he reads and takes notes on five chapters at a time and then writes a composition on a topic of his choice every five chapters. This is working well so far), twice a week (He’s halfway through this already, and I’m hoping to have some medieval history written by Christmas for him to move on into.)
Literature, twice a week. I’ve decided that I’m going to take him through the novel study in The Well-Educated Mind. He’s interested in writing fiction, and I think this will be the best way to help him develop those skills. I do want him to finish a few works of ancient literature as well, but I think I’m going to have him read those as part of his history study instead.

OTHER STUFF
Now, of course, the little voice in the back of my head is shouting, “Yes, but he won’t know everything if you let him spend so much time reading and writing.” I will ignore the little voice. If he develops his writing skills to a professional level, he’ll know how to go out and find (and learn) anything else he needs. So the only other courses I’ll be requiring of him are his high-school-transcript-non-negotiables:
Biology, correspondence course, twice a week
Algebra, with tutor, three times a week

We’ll start this mid-August, and no doubt tinker with it a bit as we go. I’ll report back about how it’s working out…

Publicity photos and the next six yearsPublicity
Emerging, dishevelled, from the groves of academeThe raving writer