Following on my first and second posts in this series, I’ll now wrap up by telling you why my upcoming History of the Renaissance World begins in the twelfth century and ends with the conquest of Constantinople.

And I’ll do so by giving you a preview of the book. Here’s the preface. Hope you enjoy. 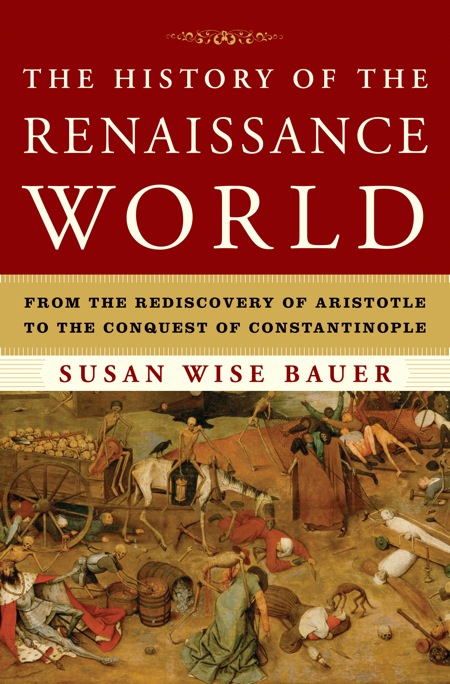 Not long after 1140 AD, the Italian scholar Gerard of Cremona travelled to the Spanish peninsula, hoping to find a rare copy of the thousand-year-old Greek astronomy text known as the Almagest.

His chances were better there than anywhere else in Europe. The southern half of the peninsula had been in Arab hands for centuries, and the ruling dynasties of Muslim Spain had brought with them thousands of classical texts, translated into Arabic but long lost to the vernacular languages of the West. The libraries of the city of Toledo, in the center of the peninsula, housed scores of these valuable volumes–and Toledo had now been recaptured by one of the Christian kingdoms of the north, meaning that Western scholars could visit it in relative safety.

Gerard found more than he bargained for. Not just astronomy texts but classical and Arabic studies of dialectic, geometry, philosophy, and medicine; unknown monographs by Euclid, Galen, Ptolemy, and Aristotle; a whole treasury of knowledge. Overwhelmed, he settled into Toledo and set to work learning Arabic. â€œRegretting the povery of the Latins in these things,â€ one of his students wrote, â€œhe learned the Arabic language in order to be able to translate….To the end of his life he continued to transmit to the Latin world (as if to his own beloved heir) whatever books he though finest, in many subjects, as accurately and as plainly as he could.â€

This is not a history of â€œthe Renaissance.â€ Rather, it is a history of the world during the period which historians have often (although not universally) associated with a rebirth of interest in classical learning. As Gerardâ€™s story shows, this rebirth began much earlier than the fourteenth century.

One of the first Italians to give a name to the reawakened interest in Greek and Roman learning was the poet Petrarch, who announced early in the 1340s that poets and scholars were ready to lead the cities of Italy back to the glory days of Rome. Classical learning had declined, Petrarch insisted, into darkness and obscurity. Now was the time for that learning to be rediscovered: a rebirth, a Renaissance.

Petrarch was lobbying, in a polite and academic but very pointed way, for the distinction of official Roman Poet Laureate; in that day, something perhaps equivalent to the Man Booker Prize or the National Book Award, a public recognition that he was an intellectual whose words should be heeded. As part of his campaign, he was placing himself at the head of an already-existing phenomenon. Since before Gerard of Cremona, Western scholars–many of them Italian–had been working through Arabic libraries, reaquainting themselves with Greek and Roman thinkers. So much of this intellectual groundwork had been laid already that many modern historians now speak of a â€œTwelfth-Century Renaissance.â€

By 1340, in other words, renaissance was so far advanced that it had become visible. Historical eras are never recognizable when they begin; they can only be seen in hindsight. The Renaissance, as the following chapters will show, was rooted in the twelfth century. The twelfth century saw the real beginnings of the struggle between Church hierarchy and Aristotelian logic, a struggle which–reincarnated as a fight between Scripture and science, creation and evolution–is still ongoing in the United States in 2013. The twelfth century saw the death of the Crusades, the rise of the Plantaganets, the dominance of the Japanese shoguns, and the journey of Islam into central Africa.

It was a century of renaissances, and that is where my story begins.

The last chapter of this history tells the story of the Ottoman attack on Constantinople in May of 1453, when the triumph of the Turks brought a final end to the Roman dream.

The cultural phenomenon known as the Italian Renaissance continued well after 1453; I do not go on, in this book, to chronicle some of its better-known phenomenon (the political philosophies of Machiavelli, the paintings of Michelangelo and Raphael, the inventions of da Vinci, the observations of Galileo). But in worldwide terms, by the time Constantinople fell, the Renaissance had begun to shade into new eras.

Like the Renaissance itself, those eras were not named by historians until much later. But the ground of the Reformation was seeded and had begun to sprout; the followers of the English scholar John Wycliffe and the Bohemian priest Jan Hus were already organizing aganst the authority of Rome. And the Age of Exploration was well underway. Twenty years earlier, the Portuguese captain Gil Eannes had finally pushed south past Cape Bojador. A decade after Eannesâ€™s boundary-breaking journey, Prince Henry of Portugal sponsored the first slave market in Europe: a closely orchestrated, carefully publicized event meant to whip up widespread enthusiasm for further explorations into Africa.

The Turkish overthrow of the Byzantine empire was a world-changer. As the historian Caroline Finkel points out, even the Turks were unsettled by Constantinopleâ€™s fall; the Ottoman chronicler Tursun Bey, the only Turk to describe the final battle, calls it a â€œveritable precipitation and downpouring of calamities from the heavens, as decreed by God Himself.â€ The transformation of Constantinople into Istanbul is an end and a beginning, an exclamation point and new paragraph in the punctuation of world events.

But the transition away from Renaissance and towards the next phase of human history is, perhaps, even more apparent in the events of the year before. The Italian pope Nicholas V had just issued a papal bull called Dum Diversas. In recognition of the expense and effort that the Portuguese had put into exploring the African coast, the Church gave official approval to the enslavement and sale of Africans by the Portuguese crown–a sanction confirmed again three years later in the charter Romanus Pontifex.

Wooing the allegiance and support of the powerful King of Portugal, the pope had transformed slavery into an institution that all Europeans could profit from without guilt. Historians do not normally speak of the Age of Enslavement, but in hindsight we can see that the decrees of the 1450s shaped the futures of three continents and began a whole new story.

When Did the Middle Ages End and the Renaissance Begin? The Last in a Three-Part Reflection2013-03-102013-03-10https://susanwisebauer.com/wp-content/uploads/2017/05/logo1.svgSusan Wise Bauerhttps://susanwisebauer.com/wp-content/uploads/2017/05/logo1.svg200px200px
Showing 3 comments
Copyright All Rights Reserved © 2017
Contact Us

When Did the Middle Ages End and the Renaissance Begin? Part Two of a Three-Part ReflectionProduction, The raving writer
Spring is coming…Coping with the farm