This morning I finished the outline for Volume II of the history series and sent it off. (Always odd to be planning for the next book while you’re still watching the previous one go into production…) So I am thoroughly mounted on my Why World History Is Important soapbox, and thought I’d share with you just why Americans generally think world history is 1) boring and 2) irrelevant.

This model has three effects.

First, very few adults actually remember much of anything that they learned in world history.

Second, this is based on a theory originating in the late nineteenth century, around the time that child-centered learning also emerged as an educational ideal. Children (so the theory goes) are always interested in what is most pertinent to them; so first they should do their own neighborhood, next their own country, and then eventually the rest of the world, in expanding circles of learning. If you were to draw a diagram of this learning style, youâ€™d see the student right at the center of it, and world history on the far edge; the inevitable result is that children learn that they are at the center of history, and the rest of the world is very far off. (Anyway I don’t think the theory is true. In my experience, children are always much more interested in ancient Egypt and Pompeii than in their local government officials.)

Third, this gives students a grossly distorted idea of the relationship between America and the rest of the world. America looms large in the studentâ€™s mind; â€œeveryone elseâ€ is extremely secondary. High school studentsâ€”and usually college students as wellâ€”finish their studies with a picture of America like a huge ball with impermeable sides, floating around in space, with all the other countries in the world like much smaller balls that bounce off of us and never really affect us unless we have to shoot at them. (This explains so much about our foreign policyâ€¦.but once again I digress…)

This sort of history education produces adults who have no idea how American history relates to the rest of the world. In their years of study, American history was so segmented off from â€œworld historyâ€ (which is, apparently, everyone else) that they were never able to line up the events of the American past with the central events in the history of other countries. It always startles my college students no end, when we read The Autobiography of Benjamin Franklin, to find out that Franklin spent so much time in France. In their minds, Franklin is firmly in the American history textbook, under the heading â€œAmerican Revolutionâ€; the French Revolution is over in the world history textbook; it generally does not occur to them to connect the two.

Which highlights the core problem with the way Americans study history. The study of countries in isolation shortcircuits any attempt to think critically about the past. You can only ask, and answer, meaningful questions about historical cause and effect if you can go outside the borders of a country to look for both. As long as youâ€™re trapped within a single countryâ€™s history, you can never fully understand it.

The only way to circumvent this is to study history by era, not by country; study ancient times and medieval times, not “America” or “Asia” or “The World” (that would be, once again, everyone else.)

Which is why I’m writing the History of the (Whole) World.

And now for a quick farm update: I’ve just been for a little walk around the garden before going back to the Dissertation That Wouldn’t Go Away, and the grape arbor 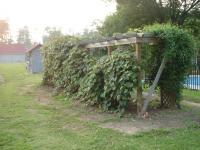 has got more grapes on it than I’ve ever seen.

and it is the most beautiful, still, green, fragrant evening ever,

even if the chickens do appear to be plotting revenge just on the other side of the corn patch. 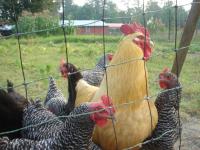 I hated to tear myself away and go back to work…but the kids are in bed, and the Dissertation That Wouldn’t Go Away hasn’t gone away. I’m on Chapter Four and at this point I’m boring myself. I can only keep typing as long as I play Dave Matthews and Live very loudly while I write. Can’t wait to get this finished and turn back the Middle Ages.

Kill the wabbit, kill the wabbit…Coping with the farm, Publicity, The raving writer
Searching for blurbsPublicity