This past week, we finished off the old year by finally having Christmas with my parents, who have been in Seattle with my brother and his family. We kept their presents under the tree until they got back. 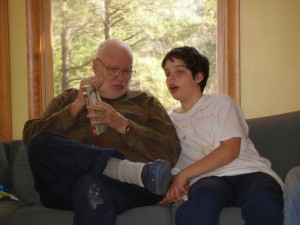 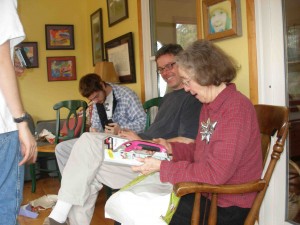 Mom and Power Scissors from Ben

A multigenerational household has its difficulties–my parents have to put up with noise overhead, messes in the yard, and teenage boys constantly raiding their fridge when mine is empty–but I can’t tell you how happy I am that they’re here, and not in a retirement community in Florida somewhere.

Not that there’s anything wrong with that.

And then we started the new year. Pete and I celebrated our nineteenth wedding anniversary (we got married on Epiphany, January 6, 1990).

And I bought a harrow.

This is exciting. No, really. A harrow has two functions. You can pull it around the pasture with the spikes down, to aerate the ground or get it ready for seed, or you can flip it over and use it to spread manure. Horse manure is great fertilizer if it’s spread out, but in clumps it kills the grass.

The harrow came all bundled up, so I wrestled it onto the RTV and hauled it out to the barn. 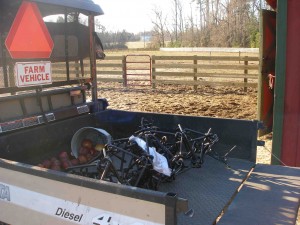 This is the RTV. My father bought it earlier in the year. I did kind of giggle at it (doesn’t it look like a giant version of one of those toys little kids drive around in?), but it’s amazingly useful. 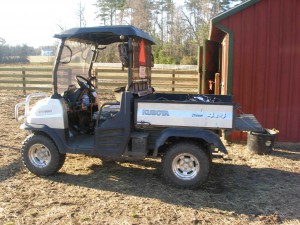 Ben helped me unwire the harrow, which was held together with about twenty little twisty wires, and we hooked it onto the back of the RTV and started spreading. 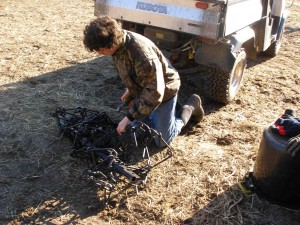 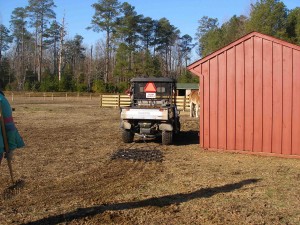 Emily assisted by playing knights and dragons with Max, which at least kept him out of the way. He is unnecessarily helpful. 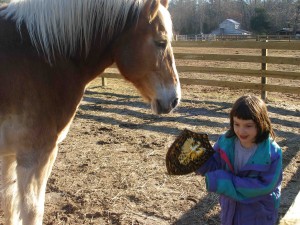 I am ridiculously pleased with myself. I never had a harrow before, and now the pasture–all properly spreaded–looks great.

I have discovered two things in the process. First, there is an unlimited amount of amusement that children can get out of repeating, “This is a harrowing experience!” when there is an actual harrow involved.

Second, spreading/harrowing is the perfect farm job for a twelve-year-old boy and eight-year-old girl. I told Dan and Em to drive around on the RTV and aim for every pile of manure they could find. They spent over an hour careening around the pasture, whooping “There’s one! Aim for it! Bogey coming in from the side!” It was like Space Invaders. With piles of poop. How cool is that?

Also I drew a bunch of maps, tried to write some flap copy, and reflected on the generally pickled state of my post-manuscript brain.